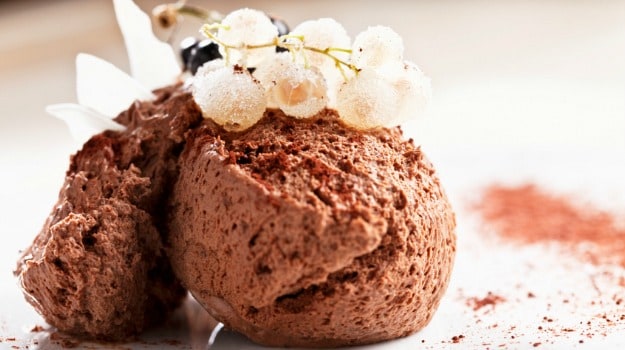 When it comes to mousse, nothing but luscious will do.

My obsession with French food began with Mousse au Chocolat, also known as Chocolate Mousse. I'd like to believe it was at a small little French bistro, after an exquisite main course that included piping hot lamb stew and tuna tartar, but it was really at an all-you-can-eat-buffet. The food may have been sub-standard but their chocolate mousse made my heart pound faster. I raced between the table and the dessert counter (over and over again) till I was oozing chocolate mousse out of my ears. I'm not sure if it was its light and foamy texture, its bitter sweet but rich chocolate-y taste or the fact that it was dressed in finely sliced strawberries, but I was hooked!

The word 'mousse' is a French word that means 'foam', which has an airy texture with bubbles. Its inception can be traced back to the late 1800s when it was used in mostly savoury dishes, atop fish and vegetables. According to an article published by the Culinary Institute of America, chocolate mousse was first known as the 'mayonnaise de chocolate' and was invented by a Post-Impressionist painter known as Henri Toulouse-Lautrec in the late 19th century.

A traditional chocolate mousse recipe requires eggs, the yolks and whites separated and whipped well, good quality chocolate because that's what holds it together, and sugar if you like your mousse sweet. Besides these essentials, you can dress your mousse with anything you fancy: fruits, marshmallows and even M&Ms. Or you can blend brandy, rum (any kind of alcohol really), coffee, cardamom, cinnamon and even chilli flakes. In my hunt for the perfect (and easy) chocolate mousse recipe, food blogger Reshmy Kurian became my culinary guide. I used her recipe and her vast knowledge on the subject to uncover a few basics you must know before you start to whip up your own mousse:

1. Whip the egg whites with an electric beater instead of your hand. Do it till you see gorgeous snowy peaks.

2. Be very careful while separating the egg white and the yolk.

3. Use clean and dry bowls.

4. Be careful you don't overheat the chocolate because if you do, it tends to become grainy and ruins the texture.

5. Make sure the eggs are at room temperature.

6. When you fold the egg whites into the chocolate mix, do it really slowly and carefully. Try and use a rubber spatula if possible.

Now, for the ultimate recipe - I worked through a bunch of recipes, both easy and complicated. Julia Child's recipe was the most complex of them all; nine ingredients and a huge set of well-timed instructions later I arrived at a mousse which was good but not worth all the effort. In Gordon Ramsay's recipe, he uses creme fraiche and double cream to compensate for the eggs, which he gives a skip. It's a really good option for vegetarians but it's awfully sweet so you may want to alter the amount of sugar that goes into it.

So finally, here's a recipe that I discovered which turned out perfect. To make the mousse a bit more dense and creamier than usual, you can also use some butter (unsalted would be preferable) while melting the chocolate. However, I wouldn't recommend this to someone trying to watch their weight!

1. Take the chocolate and melt it on a double boiler. Don't let it be in direct contact with water. Add the milk to it.

3. Break the eggs carefully and whip the egg whites with sugar and salt till you see the snow peaks.

4. Mix the egg yolks into the melted chocolate and then fold one third of the egg white to this mix. Slowly fold the remaining egg whites.

5. Transfer the mix into small bowls or glasses till it sets.