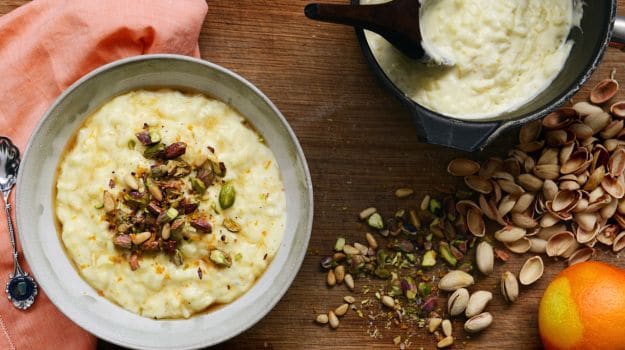 Blood orange rice pudding is a delicious way to get all your fruit and vegetables in over winter Photograph: Lauren Bamford for the Guardian

These last nights of winter demand this zesty, creamy dessert. As well as being delicious, the blood orange will help keep colds at bay

Australian varieties are grown for their pigment, with farmers choosing the reddest ones. They are a winter fruit, available at the outset of the season in late July, and extending to October or even November if conditions are right. At the market, choose a blood orange as you would an orange: you want one that is firm and heavy with juice.

Native to Sicily, the blood orange grows at its best in a Mediterranean climate, loving hot days and almost freezing nights, much like grape vines. This extreme variability in temperature helps produce the red of the blood orange.

In the kitchen, substitute blood orange where you would normally use the zest of a regular orange, lime or lemon. Make blood orange curd. Use in a winter salad of blood orange, radicchio, fennel and mint.

At the end of winter, when we're often sick of soups and stews, and not eating as many raw vegetables as we would in summer, it's refreshing to crunch into fennel, bitter radicchio and the tart blood orange.

Juice blood oranges first thing in the morning to ward away a cold, and make sure you freeze some juice for summer cocktails.

This rice pudding is zesty and creamy, sure to comfort on the last of these cold nights. The base of the recipe is adapted from the Edmonds Sure to Rise cookbook, which is a New Zealand classic and was first published in 1908 as a way to sell baking powder. It's a very old fashioned cookbook. The process of cooking rice pudding doesn't vary much, but the flavours added to the creamy rice can be played with.

You could use saffron, or anise, or ground ginger, cinnamon, raisins or lemon peel "though not all at once. Here we've simply used cardamom with the pistachios and pine nuts to top. There's not much sugar in the pudding itself, so drizzle with a little agave to serve. You can up the sugar in the recipe if you'd like it sweeter.

Combine the milk, cream, orange zest and cardamom seeds in a heavy bottomed, medium-sized saucepan. Bring to the boil over medium heat, watching it closely. It can easily boil over. Reduce the heat to low and add the rice and sugar, stirring well. Simmer, frequently stirring, as you would a risotto, for the next 20-25 minutes. You want your rice with a little bite left in it, al dente, but the mix should be thick and creamy.

Cover and set aside for 15 minutes. To serve, spoon into a large dish or into individual serving dishes, sprinkling with the nuts and drizzling with the agave.

The pudding can be served warm, as above, or refrigerated and served cold. Cold, it makes a good breakfast.