The Dark Side of Instant Noodles: What Makes Them Harmful? 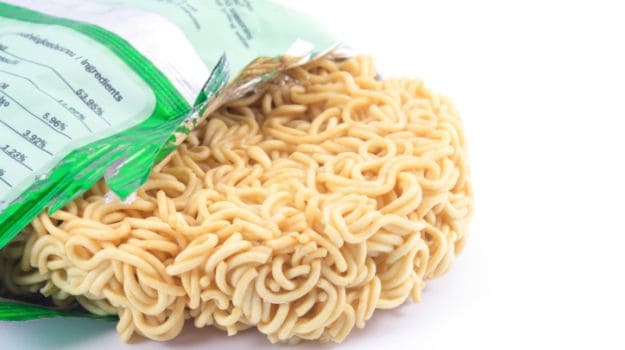 The recent Maggi noodles controversy has not only made the instant noodles go off the shelf in most homes, but has put other brands under the scanner too. A few loyal fans still continue to enjoy their steaming Cup O' Noodles, but the majority of people are beginning to get cautious.

Instant noodles is a food item that has always been under a lot of speculation. When I was a little girl, I was allowed to have it only on Sundays. My mother would say, "Isme maida hai, indigestion hoga zyada khane se," meaning, most instant noodles are made of maida (refined flour) which could cause indigestion. A common belief was that instant noodles could lead to bowel troubles and obesity.

I therefore decided to put to rest these speculations and seek expert advice on the same. With the world gobbling down 102.7 billion instant noodle servings in a year, it's finally time to analyze how much is too much and whether we require to draw a line on processed food consumption.

What makes it so bad?

Since these instant noodles are made to bear a longer shelf life, they are highly processed. They  are low on nutritive content; high on fat, calories and sodium; and are laced with artificial colours, preservatives, additives and flavourings.

"In most cases monosodium glutamate (MSG) as well as tertiary-butyl hydroquinone (TBHQ) - a chemical preservative derived from the petroleum industry - may be present in instant noodles for their taste enhancing and preserving properties. Though dietary intake of these elements is allowed within a limit, regular intake of these can cause severe health issues," said Dr. Sunil Sharma, general physician and head of emergency, Madan Mohan Malviya Hopsital, New Delhi.

(South Koreans Stick by Their Noodle Diet Despite Health Worries)

Last year, The Washington Post had reported of a South Korean study conducted on the effects of instant noodles on human health.  According to the study, "Although instant noodles is a convenient and delicious food, there could be an increased risk for metabolic syndrome given [the food's] high sodium, unhealthy saturated fat and glycemic loads," said Hyun Shin, a doctoral candidate at the Harvard School of Public Health and a co-author of the study.

"Women who ate instant noodles twice a week or more had a higher risk of metabolic syndrome than those who ate less, or not at all, regardless of whether their diet style fell into the traditional or fast-food category, " as published  in The Washington Post.

The study concluded that excessive instant noodle consumption can not only trigger obesity but also metabolic ailments like diabetes, high blood pressure, hypertension, heart problems and so on.

Most instant noodles are made of maida - milled, refined and bleached version of wheat flour. What makes maida so bad for our health is the fact that it is highly processed - richer in flavour but, unfortunately, devoid of any nutrition.

According to Dr. Simran Saini, Nutritionist at Fortis Hospital, New Delhi, "Maida-based instant noodles are loaded with preservatives and are nothing but a source of empty calories ripped of all nutrition. Excessive consumption may lead to obesity."

"In most cases it has been seen that these maida-based instant noodles take a toll on the digestive process. Its remnants may reach the appendix area of the body and trigger infection," she added.

Unfortunately, most processed foods are loaded with not-so-good fats like saturated fatty acids or trans-fats. Monounsaturated fatty acids as well polyunsaturated fatty acids are the good-for-you fats. If one digs deep into food labels and what those terms really stand for, one will realise that edible vegetable oil, sugar, sugar syrup, flavour enhancer and many other agents like these aren't good for your health at all. Instant noodles contain saturated fats which if consumed excessively or regularly can raise the level of cholesterol in the blood. Having high cholesterol increases the risk of heart disease as well as type 2 diabetes.

"How will you ever know what kind of oil has been used? Edible vegetable oil could mean anything; usually it is nothing but palm oil, which has high content of saturated fats and is detrimental for health. Processed foods including instant noodles contain high amounts of sodium, food additives, petroleum by-products (in some cases), bad cholesterol, simple carbs with no nutrition and no fiber whatsoever. How can you not expect the regular consumption of such items to harm you?" opined Dr. Sharma.

(Finally, Food Labels on Nutrition Facts Will Get a Makeover)

In the year 2013, a group of local American doctors conducted an experiment to see how does our digestive process functions when we eat instant noodles. With the help of a micro, pill-sized camera the doctors were able to see the noodle churning process on their computer screen.

Interestingly, it was seen that the stomach took close to a couple of hours to digest and completely breakdown the noodle strains as opposed to freshly made noodles. The experts explained that the processed nature of these noodles usually make them hard to digest.

All the above mentioned studies and reports are indicative and suggestive of the fact that too much of something is obviously bad. And not only in case of instant noodles, but for all types of processed foods too.

(The Instant Noodles Challenge: How Much Can You Chow Down?)

"One of the biggest problems these days is the fact that people have started replacing real food with fast food," noted Dr. Sharma. That is indeed true as I remember several times when late at night or on a lazy Sunday morning I would get up and quickly cook instant noodles just to tame that gnawing hunger.

According to Dr. Sharma, fast food and processed items should be consumed occasionally and should never replace actual meals. One should always remember that over-indulgence does no one any good.