Sonam Kapoor Ahuja and Anand Ahuja are vacationing in London and the couple went to Bombay Bustle in London to enjoy some authentic desi food. 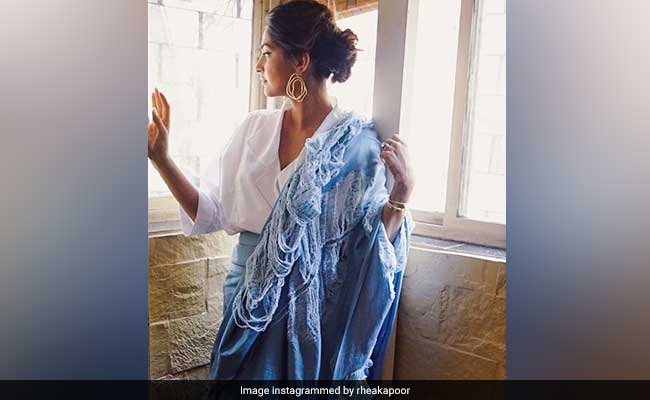 Highlights
Promoted
Listen to the latest songs, only on JioSaavn.com
Bollywood actor Sonam Kapoor Ahuja, who got married to her entrepreneur boyfriend Anand Ahuja in Mumbai this year, is currently vacationing in London. The good-looking couple has been keeping their fans and followers updated about their vacation through their respective social media pages. Sonam and Anand recently also celebrated Karisma Kapoor's birthday, along with Kareena Kapoor Khan and Saif Ali Khan. However, amid all those celebrations the couple found some time to spend by themselves, when they visited a popular Indian restaurant in London. Sonam Kapoor posted pictures and videos of herself and her husband at the restaurant Bombay Bustle, located in Mayfair London, on her Instagram account.

Due to a significantly large Indian diaspora in London, there is no dearth of Indian restaurants in various parts of the city. However, Sonam Kapoor Ahuja chose restaurateur Samyukta Nair's Bombay Bustle as to satiate their desi food cravings. In the Instagram story video, Sonam is heard saying, "Guess where we are? Favourite place in London! Sammy I'm so proud of you."

By the looks of it, Sonam was really missing Indian food in London, as she chose to go for a plateful of authentic South Indian fare- masala dosa with sambhar and coconut and garlic chutneys. Have a look:

Sonam Kapoor, who has been a vegetarian for many years, had famously switched to a vegan diet last year. In 2016, Sonam was named the Hottest Vegetarian of the year by PETA India. The actor is quite a fan of South Indian cuisine (honestly, who isn't?). Back home in Mumbai, Arya Bhavan and Mani Dosa Centre are two of her favourite South Indian food joints. Sonam is not much of a picky eater and loves home-cooked food. Now we know why she opted to gorge on dosas in London! So the next time you are vacationing in London and feel like you miss the food back home, you know where to go.