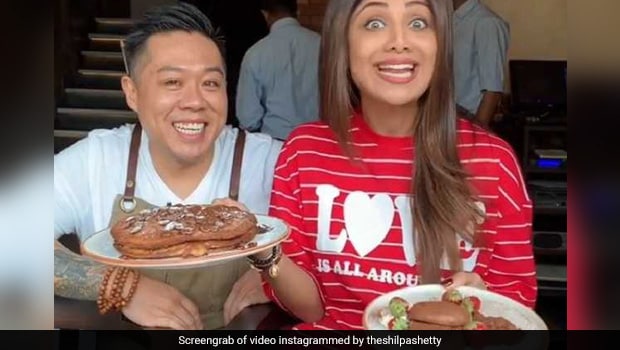 Bollywood binge queen Shilpa Shetty Kundra was in 'chocolate heaven' this weekend and we weren't surprised at all! Shilpa posted a number of pictures and a 'Sunday binge' video from celeb-favourite restaurant Bastian in Mumbai yesterday, and we couldn't help but feel a little bit of the sugar rush that Shilpa was probably feeling in the video. The petite beauty was seen bingeing on chocolate desserts, which were a part of her 'Happy Diet,' which she said she was on during the Sundays. The desserts were served to Shilpa by Chef Kelvin Cheung, who is spotted serving up lip-smacking delicacies to a number of Bollywood celebs. Cheung had last mesmerised Dhadak actor Ishaan Khatter, by preparing him a gigantic and decadent birthday cake.

Shilpa Shetty Kundra also headed to Bastian in Mumbai to partake in her customary weekend binge and this time she celebrated her cheat day with two amazing chocolate desserts - Chocolate Veloute and gluten-free chocolate pancakes. "On Sundays, I'm on a "Happy Diet." I eat things that only make me happy (sic)," Shilpa wrote on Instagram, adding, "@chefkelvincheung spoiling me with a chocolate #overdose... melting #chocolateveloute and #chocolatepancakes .Yummmmmm I'm in #chocolateheaven."

Have a look at Shilpa Shetty Kundra's latest Sunday binge:

Now, that's called a proper cheat meal! Shilpa Shetty Kundra is often seen advising her fans and followers to stay away from sugary food and meals on weekdays and insists that it's okay to cheat once in a while, if you've been good the rest of the week. It's important to remember that too much indulgence is bad for the body and overall health, but the occasional sweet binge may even keep you motivated to stick to clean eating and a healthy diet. Well, now you know where to head to, in case you are craving melt-in-the-mouth chocolate desserts. Who knows? You might just catch Shilpa Shetty there during one her of binges!