Fat Is Not the Enemy 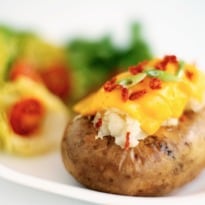 A group of Harvard scientists has waged war against the low-fat diet myth, singling out the muffin as its first target.

For decades, full fat has been cast as a villainous food group, with manufacturers clamoring over themselves to come up with fat substitutes and low-fat versions of normally indulgent items like cheese and cake.

But scientists are beginning to change their tune, pointing out that low-fat diets can actually be more harmful than high-fat foods for some, due to the amount of extra carbohydrates and sugars used to compensate for the absence of fat.

Last week, in a partnership with the Culinary Institute of America (CIA), researchers at the Harvard School of Public Health developed five muffin recipes - arguably the most popular food item to go low-fat, made with healthy fats and whole grains, and consequently, less salt and sugar.

A regular blueberry muffin from a national coffee shop chain, for example, has 450 calories. A low-fat version, by comparison, may have the same amount of calories, but it's also likely to contain even more carbohydrates and sugar and 60 percent more sodium than a regular muffin, experts warn.

With many retailers eliminating harmful trans fats, experts also point out that consumers don't have as much to fear from full fat foods and may in fact be passing up heart-healthy fats like soybean or canola oil.

Together with chefs and nutritionists from the CIA, Harvard researchers gave the blueberry muffin a recipe makeover, making it less than half the size of a coffee shop muffin at just 130 calories.

Made with a mix of whole wheat, white and almond flour, the muffins also call for canola oil, one of the good guys in fat.

The trend towards full-fat foods has also been driven by a consumer desire for more natural, minimally processed whole foods, reports the Center for Culinary Development's Kara Nielsen in her monthly food trend newsletter Side Dish. The CCD is a food and beverage development company.

Promoted
Listen to the latest songs, only on JioSaavn.com
Fats that were once shunned into shame - duck fat, lard and schmaltz, have become increasingly acceptable for consumers, Nielsen points out, as it's also part and parcel of another epicurean trend that values nose-to-tail and farm-to-table eating.

For home bakers, the CIA and Harvard experts also offer a few more tips on how to build a healthier muffin and other baked goods:

Comments -Downsize portions
-Use whole grains instead of white flour
-Slash the sugar
-Use heart-healthy oils like canola, olive, corn and sunflower
-Use nuts for extra protein
-Scale back on salt
-Use fresh, whole or dried fruit to add flavor and sweetness