Find Your Inner Yogi: Latest Yoga Trends Offer Something for Everyone 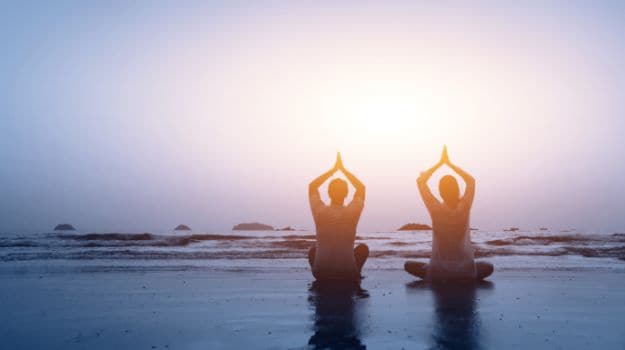 Visualise the well-known yogic posture - the downward dog pose. Instead of on the floor of your yoga studio, place your yoga mat on a paddleboard on the unfathomable expanse of the ocean stretching on till the horizon. Add a mesmerizing azure sky adorned with cotton candy clouds and a sultry beach dotted with green hued palm trees. Stuff dreams are made of, isn’t it? Well, this is not just a speck of our imagination anymore. The malleability of the ancient Indian tradition of yoga has allowed us to tweak it here and there to add a touch of excitement, challenge and adventure. These variations range from bold and experimental to downright wacky and bizarre. Here are a few to watch out for -

(Hot Barre and Punk Rope: These are the Weirdest Fitness Trends of 2015)

Practising yoga on a rectangular rubber mat firmly in contact with the ground seems to be an exercise for mere mortals now. Yoga practice has risen above the floor, quite literally. Anti-gravity yoga involves performing the asanas while you are suspended from the ceiling by a soft hammock, ropes or a harness. It is a liberating exercise, giving you an incredible experience of lightness as you soar, twist, stretch and float in the air while doing the most complicated and intimidating postures with an astonishing ease. It employs the use of muscles, especially the core, you perhaps did not even know existed, as you will realise when your feet finally hit the ground. Aerial yoga is taking the ancient tradition to new heights and forces our minds to trust the human body more freely.

(Taking Yoga to Another Level: Celebrities Catch on to the Aerial Yoga Trend)

Discover your inner ‘dogi’ with the help of your favourite canine friend. The natural movements of dogs have inspired a lot of asanas (for instance, the downward and upward facing dog poses) and this new fad lets your dog benefit from a session too. Getting into doga poses boosts your dog’s blood circulation and range of motion. It is an invigorating, socialising and bonding session for both the partners. Yet another reason for dog lovers to drag their best friend everywhere!

(Pull Out Your Mats: Different Types of Yoga and Their Many Health Benefits)

The two terms are often used interchangeably as they are based on a common concept but in reality, follow slightly different principles. In a nutshell, both are like doing yoga on a really hot summer day.

Bikram yoga puts you in a ‘torture chamber’, as founder Bikram Chaudhary calls it, strictly heated to a temperature of about 40.8° C with the humidity set at 40 percent. There are 26 fixed poses including two pranayama or breathing exercises, each of which is to be performed seriously, twice in 90 minutes. This toasty form of yoga is a hit amongst the celebrities and the fad has caught with the rest of the world too. Hot Yoga, on the other hand, can be customised by each instructor. The temperature is usually set anywhere between 26 to 38°C with variable humidity. Sessions are interactive and fun, usually accompanied with music to keep you pumped up.

Both concentrate upon finding that delicate balance between flexibility and strength, while the heat detoxifies the body and makes it more flexible. While you may resemble a hot mess at the end of each session, nourished is really the word that comes to mind.

Emoji yoga or emoga is another brainchild of the tech age everybody could perhaps have peacefully lived without. Started by Londoner Charlotte Bell, the emoga class starts with the poo emoji warm-up where participants don a foetal position. This is followed by stretching out for screaming cat-face emoji, then the face-mask posture of an angry yellow person and concluding with the ‘dancing lady in a red dress’ asana. Bell feels it is the next big thing as it gives people an opportunity to centre their day on an emoji pose of their choice. Emoga does say a lot about our smartphone obsessed world and love it or hate it, it does allow for a good stretch of the ‘emojination’.

Is yoga still yoga if you combine the 5000 year-old mind-body-soul spiritual practice with a seductive dancing technique that originated in the 1920s? According to some instructors, it does make a great combination, the appropriate term being ‘vertical yoga’. While merging both the movements may seem counter-intuitive, it is a fact that both involve strength, flexibility and breathing, and a combination will only encourage students to challenge themselves by trying the conventional asanas with the help of a pole.

Restorative yoga is meant to take the body back to basics – restore peace to the mind, body and soul and be wholly present – more often than not, a challenge for most of us. We often abuse our body with extra work, unhealthy food, potent drinks and less sleep; there is bound to be a point of burnout. That is when restorative yoga comes in to help you get back on a healthy track. It uses props like pillows, eye pillows and blocks and can be a bit of a challenge for those who find sitting still an absolute chore. Think of it as an ‘adult nap’.

The deep expanse of the ocean can be a little intimidating and underwater diving brings us face to face with a deafening silence we are not always ready to face. There is a feeling of weightlessness and a stark awareness of the ‘now’, accompanied only by sounds of our own breath and heartbeat. Sounds a little familiar, doesn’t it? Diving is the embodiment of a spiritual and meditative practice, stressing more on pranayama. Deep dive into yourself as the world above ceases to exist.

Constant improvision has ensured the ancient tradition’s survival century after century. SUP Yoga, as it is popularly called, is another one of these variations. It involves practicing asanas and breath control on a stand up paddleboard as the water body under you ebbs, flows and on a particularly fateful day, throws you off. You can be one with nature in its lap, enveloped by all its elements. The catch lies in letting go of the compulsion of always being perfect and in control, allowing for the possibility that the worst that can happen is you will fall and then get right back up. The constant instability of the water fires up your core muscles, your arms and legs get tipsy and the tiniest muscles are activated. It is definitely worth a try to get off the dry land and push your limits.

Imagine the breath synchronized movements of yoga along with the expressive movements of dance. Perhaps also throw in some glamourous leotards and leg warmers. Some might even request a glass of champagne. A dynamic fusion of yoga and ‘vogueing’, a 80s dance style from the New York drag ballroom scene, Voga is creating quite a stir in the community of yogis, mostly by angering the purists with its focus on the ‘strike a pose!’ regime. Regardless, currently only available in London, it is for those who crave a little more fun in yoga and do not wish to pursue it very seriously.

CommentsPerhaps one of the most dynamic variations of yoga, Acro yoga combines three elements – solar acrobatic practices, lunar healing arts practices and yogic practices emphasizing on simplicity and complexity, movement and calmness, with a touch of kindness and nurturing. It is done with a partner, where the two constantly switch between different roles. There is a constant cycle of trust, letting go, breathing, stretching, cultivating and above all, challenging yourself. You will defy gravity and eventually, even your expectations with yourself.