Foods That Heal, on the Menu 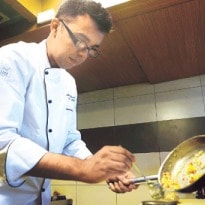 This year, city chefs, a culinary author and a food expert want to do more than tempt you with succulent dishes. Superfoods foods packed with antioxidants, vitamins and omega 3 acids, and believed to have the power to cure disease are topmost on their minds and favourites on their menus, finds Moeena Halim.

When eating right can help you ward off heart disease, cancer and other ailments, why would you eat anything else anyway? In his kitchen, Amit Bhatia, in-charge of the kitchen at Café Sundance in Churchgate, takes this thought very seriously. Bhatia, who is planning a menu overhaul over the next months, says he plans to give superfoods -- foods known for their high antioxidant, vitamin and omega 3 levels, and ideal to fight diseases such as cancer and heart disease -- their long-deserved place in his kitchen.
(Picture:Café Sundance's Chef Amit Bhatia puts finishing touches to the Chicken Breast Stuffed with Barley)

"I am testing recipes which include black garlic, artichoke and hemp seeds. Hemp seeds are fantastic for vegetarians. They are very rich in omega 3 fatty acids, which are alternatively found only in salmon. They are also very high in protein, and are a great replacement for eggs. I'm planning to use hemp seeds in breads or serve them in breakfast granola bars with a portion of yoghurt," reveals Bhatia.

Black garlic, he adds, is extremely popular overseas. "It is made by fermenting garlic so that it loses its pungent flavour. But it retains the cancer-fighting qualities that garlic has," assures Bhatia, who plans to serve it with linguine.

Barley, which is already on the menu at Cafe Sundance, is served stuffed in a chicken breast. Although most patrons aren't aware of superfoods, the dish remains very popular. "Not many people in the city know of the concept yet, but I know that it is the future of the industry," says Bhatia. The fact that most superfoods tend to add bursts of flavour to your food, is likely to help its popularity over others, he believes.

A growing number of chefs and food experts in Mumbai are taking note of superfoods. "Not only do superfoods help preserve your health, but also have healing properties against chronic illnesses," informs Dr Nandita Desai, a Juhu-based trained chef from Cordon Bleu, who is currently working on a book on healthy recipes. Desai has reserved a spot for superfoods in her book, which will be out later this year.

Bhatia and Desai aren't the only ones who will experiment with superfoods and introduce their patrons to the benefits. Chef Vicky Ratnani, Aurus, says, "Everyone wants to eat healthy and going the superfoods way is beneficial because of the emphasis on anti-oxidants, fibre and low calories." Ratnani, who is trying to look for newer, more innovative ways to incorporate superfoods to his menu this year, started by serving Cous Cous Crusted Cottage Cheese, Risotto with Barley, Seeds and Legumes, and Sweet Potato Fries (replacing regular potatoes with sweet potato, a superfood) at Aurus since last December. "By mid-January, the menu will include a seven sprouted legume salad, sunflower seeds and quinoa," he says.'


Eating right -- out of a packet

Health coach Seema Jindal, who runs Nourish Organics, is also a firm believer in the concept of superfoods. "I was first introduced to the concept when my grandmother and her sister were both diagnosed with cancer about five or six years ago. The doctor recommended they eat nutritious food but it was my sister-in-law in the US who told me about superfoods," says Jindal, who was struck by the idea of a single ingredient providing more than one type of nutrition. In 2008, she set up Nourish Organics in New Delhi. Her ready-to-eat product range, which includes amaranth cookies, onion poha and an omega seed mix, only uses superfoods. Early last year, Jindal introduced her product range at retail outlets in Mumbai.


To cook or not to cook

Ellipsis Chef Kevin Cheung also plans to redesign his menu to introduce pomegranate seeds, amaranth, fresh berries and cous cous. He says the most popular dish on the current menu -- the Caprese Salad -- happens to be full of superfoods, too. "While tomatoes can be termed a superfood, I use heirloom tomatoes, grown without hormones or steroids, which make them healthier," says Cheung, who studied superfoods "back in culinary school in 2002". Cheung also uses blueberries -- known for their anti-oxidant properties. "I know that serving them as a dessert (in Blueberry Cheesecake) takes away all the nutritive qualities. So I want to find a way of serving these berries differently," he says.

While most veggies are more nutritious when eaten raw, some improve on cooking. "Eating cooked spinach is far better, as it gives you more iron as opposed to when it is eaten raw. So if you're eating raw spinach salad, it is like consuming water," laughs Cheung. "Tomatoes are also better for the body when they are cooked," adds homeopath Dr Lubina Mohammed, who often suggests a combination of superfoods to patients undergoing chemotherapy.

Mohammed, however, is wary of using the term superfoods. "The term is a little disturbing, because even centuries ago, Ayurveda prescribed several of these foods. So if you're talking about eating blueberries, which aren't locally grown, as superfoods it is certainly a marketing gimmick," she says. Having said that, she agrees that grains, vegetables and fruits readily available in the market, have therapeutic properties that fit in perfectly with the concept of superfoods. "These anti-oxidant-rich foods help rid the body of toxins that may be the cause of chronic illnesses," she adds.

"Superfood grains such as ragi and jowar, are easily available," adds Desai, who enjoys eating the superfood-rich Quinoa Burger at Yoga House in Bandra. "It is a myth that superfoods are a foreign concept -- cheap, local and easily accessible food work just as well."

Chef Mayank Tiwari, Olive, Mahalaxmi, seconds these opinions about local produce. While he predicts superfoods as being the "next big thing" in the city, he prefers to concentrate on procuring ingredients grown within the 50-mile radius. "It is a Catch 22 situation. These foods are undoubtedly nutritious. I cannot call it a marketing gimmick, but I'm not sure if it's the only food philosophy to follow," concludes Tiwari.

There is no official definition of the term, but most nutritionists agree that superfoods are rich in antioxidants, vitamins and Omega 3. According to Nandita Desai, often one superfood can offer the nutritive value of five regular foods, and have properties that can reverse lifestyle diseases. Cocoa, spinach, tomatoes, garlic, and grains like bajra and ragi are perfect examples


How it all began

Comments Toronto-based Superfood Chef Michelle Hunter, who has been studying medicinal plants and healing foods since 2007, tells us that the concept was first introduced in Los Angeles, California. "Superfoods and the associated raw vegan cuisine became the most popular in Los Angeles and in New York in response to the high quality foods sought after by health-conscious Hollywood stars," she says. The concept "is an offshoot of Gerson therapy" and came about as a "response to the resulting ill health of the American population who have lived on the products of large, industrialised, processed food products for half a century." Superfoods are the opposite, she says. "They are not processed or high temperature heated, non-denatured, chemical-free, high in anti-oxidant ratios and many possess the qualities of medicinal plants."