Here's Why Eating Food With Hands Is A Healthy Habit

Eating with your hands has more health benefits than eating with spoons. If you haven't given this a thought, we have your back 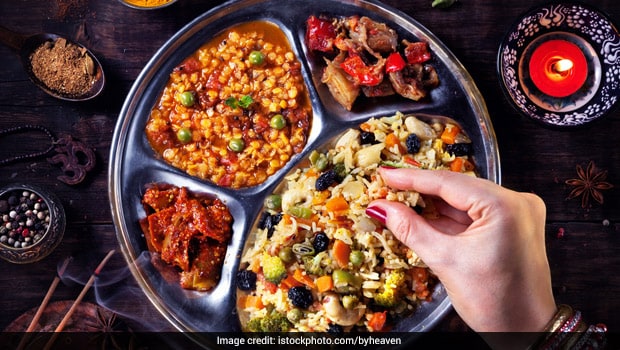 Highlights
Listen to the latest songs, only on JioSaavn.com
We have a whole range of Indian traditions that are now forgotten or have evolved over the years. It's kosher to say that some of these have changed for the better, but not others. One of these traditions is the basic practice of eating using our hands, now replaced mostly with the use of shiny cutlery. Though most of us may have turned to spoons and forks, some still like to eat their meal with hands. Back in ancient days, this practice was adopted by most civilizations including Indus valley, Greek and the Egyptians.

It is believed that as per the Vedas, hands are the most precious organs of action and that every finger is an extension of the five elements - through the thumb comes space, with the forefinger comes air, the middle finger is fire, the ring finger signifies water and the little finger represents Earth. According to Ayurveda, the nerve endings of the fingertips are believed to boost digestion. In fact, you become more aware of the textures, taste and aromas as you eat using your hands and engaging the fingertips.

Eating with your hands has more health benefits than eating with spoons. If you haven't given this a thought, we have your back.

Eating with hands itself is an excellent muscle exercise, which in turn increases blood circulation. The excessive movement of the hands may help keep the blood flow smoother.

Our body is believed to have bacteria or flora, which resides in places like hands, mouth, throat, intestine and gut that protects us from harmful bacteria growing in the environment. When we eat with our hands, the friendly flora protects our digestive system from getting exposed to harmful bacteria, further stimulating the digestive system. This doesn't mean you forget to wash your hands before and after you eat!

Do clean your hands before eating food

According to a study published in the journal Appetite, when people ate by hand while simultaneously reading a newspaper or watching television, they were less hungry during snack-time, and opted for a lighter snack. Researchers concluded that eating by hand promotes a sense of fullness and satiety as compared to eating with cutlery. This, in turn, could help lose some kilograms.

According to a study published in the journal Clinical Nutrition, people with type-2 diabetes were more likely to be fast eaters who used cutlery to eat, as compared to people without the condition. Eating with spoons and forks correlates with faster eating that has been linked with blood-sugar imbalances in the body, further contributing to the development of type-2 diabetes. So, ditch the utensils and instead eat with hands that will ensure slow down consciously.

Ditch the utensils and instead eat with hands

Eating with hands makes you eat slower than eating with cutlery, which is a much mechanical process. You have to pay attention to what you eat when you eat with hands, which makes you aware of how much you have eaten. Mindless eating is one of the biggest factors of gaining weight; hence, managing food portions plays a key role. Moreover, using hands makes you experience the food better and enjoyable.

So, what have you been waiting for? Toss the cutlery away and begin eating your favourite dishes in the gold old way to ensure a healthier you! And next time, don't toss away an old practice till you don't read up on all the facts!