I Found the Path to Fitness - When I Quit the Gym: Laura Fountain 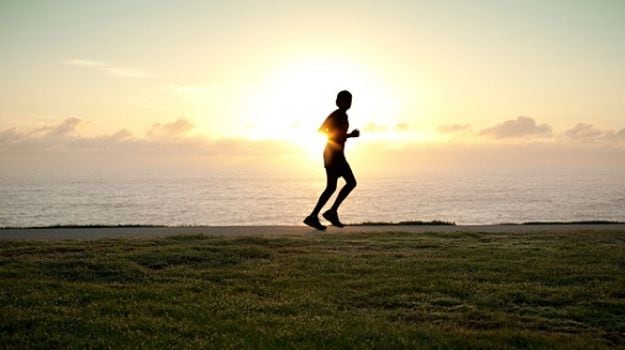 'I finally had an idea of what fitness looked like for me, and it wasn’t thrusting away in a basement in central London.' Photograph: Joe Wigdahl/Alamy​

Only when I discovered the joy of running in fresh air did I realise what an adventure getting fit can be.

If you want to get fit, don't join a gym. I know that seems contrary to all the advertising you pass on your way to work. Advertising that seems to be working, given that the money we're spending on gym memberships in the UK has risen by 44% in the past year.

I pass at least two people handing out leaflets for gyms every day. One man even tried to thrust a piece of paper into my hand as I ran the five-mile commute to my office in the early morning sunshine, calling out to me: "For winter!" Come rain or shine, though, I'd much rather be out on my bike or running through puddles than incarcerated in the gym.

Seven years ago I succumbed to one of those leaflets. After spending most of my 20s avoiding any kind of exercise save for staggering around the dance floor of a sweaty nightclub, I decided to "get fit". I didn't know what "get fit" meant, though. It was a woolly, unmeasurable phrase that had been hammered into my brain through magazine articles, advertising and TV shows. I knew I needed to achieve this elusive "fitness" but I didn't know what that looked like.

One thing I knew: I didn't want to "get a six-pack"; I didn't want to "loose [sic] belly fat fast"; and I wasn't planning on taking my body anywhere near a beach in the foreseeable future. But still, off I went in search of "fitness".

I joined a gym near my office and a couple of lunchtimes a week I'd leave my desk to stare at various TV screens while my body performed different manoeuvres on pieces of gym equipment. I still didn't know what "fitness" was, but I knew after a couple of visits that I definitely didn't have it. Every piece of machinery I used felt like it was designed to inflict pain and humiliation on me. I was red and panting and aching.

The first time I went on the treadmill I managed to run-walk my way through 10 minutes, clocking up a total distance of 1.14km. It was dispiriting, but it ignited a goal in me: I wanted to get better at running. I wanted to be able to run 5k and I wanted to run outside. I finally had an idea of what fitness looked like for me, and it wasn't thrusting away in a basement in central London, it was getting outside, splashing through puddles and feeling the fresh air on my skin.

It took a long time for me to work up the courage to actually leave the safe confines of that gym though. I slowly built up the distance I could run on a treadmill, and when I could manage 30 minutes of running non-stop I ventured into the outside world. I quit the gym as soon as my contract came to an end, but I carried on running.

Instead of swapping my computer screen for gym TV screens at lunchtimes, I'd put on my trainers and run along the Thames and come back feeling refreshed. I joined a running club, made friends with other runners and went running with them. I chatted to them as we clocked up the miles rather than pounding away on a treadmill next to strangers plugged into their own screens.

I used the money I'd saved on gym membership to buy myself a fancy new GPS watch so I could measure my runs as they got longer and longer. I ran an 80km trail race through Paris this year, something that no amount of treadmill pounding could have prepared me for. I cycled 300 miles from my flat in north London to Rotterdam this summer and it was a lot more fun than any spin class. I've swum in ponds, rivers and lakes all over the country after only learning to swim in the past few years. But, along with a growing number of people, I ditch the pool in favour of an outdoor swim as soon as the mercury starts to rise each May.

Exercise has many health benefits, regardless of where you do it. But to me exercise isn't something on my to-do list, to be ticked off. It's a way to explore the world and have adventures and being "fit" means making sure my body is prepared for them. And no great adventure happens in the gym.