Besides this, the Ministry recently released a 'National Clinical Management Protocol' for Coronavirus management. This protocol is majorly based on Ayurveda and Yoga. 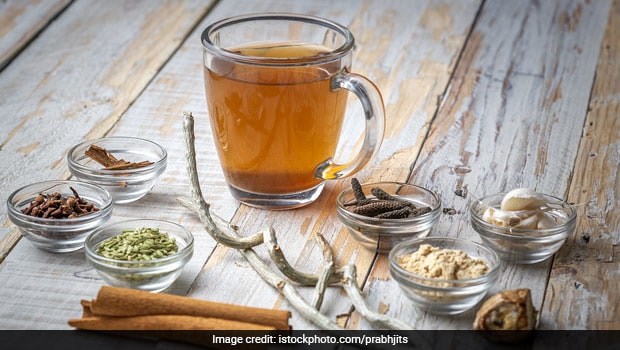 The importance of strengthening immunity is no secret to the world. Amidst the ongoing Coronavirus pandemic, health experts around the world have been recommending boosting immune system to fight against germs and virus, and reduce the risks of infections. While popping pills very often is not considered a healthy practice, people have been resorting to different home remedies like kadha, herbal tea, haldi drinks etc. to boost immunity and stamina. Made with a concoction of several traditional herbs and spices, kadha is known to promote immunity as well as overall health. But a few studies had linked too-much consumption of these Ayurvedic drinks to liver injury.

Dismissing the claim, AYUSH Ministry recently announced it to be a 'wrong notion' and stated that these herbs and spices are commonly found in every kitchen. The Ministry also claimed that the ingredients used in kadhamay have a positive effect on our respiratory system.

"There is no evidence that it (kadha) damages the liver. It is a wrong notion because the ingredients that go into the ''kadha'' are used as masala in cooking at home," said Vaidya Rajesh Kotecha, secretary, AYUSH Ministry, as per a report in PTI. However, he further said that studies are being carried out to understand the effects of these ingredients against COVID-19.

For the uninitiated, the Ministry, in March, issued some self-care guidelines to boost immune health. The guideline suggested consumption of a decoction twice a day, made with ingredients like basil, cinnamon, black pepper, dry ginger, and raisins.

Besides this, the Ministry recently released a 'National Clinical Management Protocol' for Coronavirus management. This protocol is majorly based on Ayurveda and Yoga.

The “National Clinical Management Protocol based on Ayurveda and Yoga for the management of Covid-19” was launched by Ministers @drharshvardhan Ji and @shripadynaik Ji. You can read the protocol here: https://t.co/q4Ucz6vJKqpic.twitter.com/cxzIwzSJqD

The document lists ashwagandha, guduchi, pippali, chawanprash etc. for Covid and post-Covid management. This may also help prevent lung complications and fatigue. The Ministry also recommends consumption of warm water with herbs like ginger, coriander, basil, cumin seeds etc., or golden milk at night with half teaspoon of turmeric powder in 150 ml hot milk, and AYUSH-recommended kadha once a day. However, the ones with indigestion problem may avoid drinking haldi doodh.

The document also lists gargling with warm water containing a pinch of turmeric and salt, regular yoga practice, steam inhalation with carom seeds, mint and others, as a part of healthy lifestyle practice.

Speaking about the protocol, Kotecha informed that consuming kadhais just an addition to the ongoing COVID-appropriate behavior and this standard treatment protocol must not be considered a "replacement" for the former.