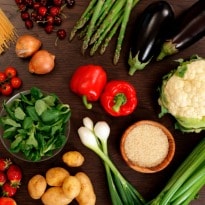 Let me say this at the outset, it wouldn't be quite fair to say that this list represents global food trends. Simply because the availability of ingredients is limited to geography and what we consume is governed by history. But it's a representative list in the sense that never before have ingredients traveled around the world at such a swift speed whether in real terms or virtually.

So while the Americans are chewing on Chia seeds, we in India could be discovering the age old goodness of ragi. I don't know about you, but at least I am.

Walk into a supermarket and you are likely to see an aisle dedicated to Gluten free. What is gluten free? It essentially means without wheat. Try telling a north Indian that he should give up his rotis, and he will think you're mad. But over the last few years, gluten allergy has become quite common. Many people claim their 'gluten sensitivity' makes them feel bloated and fatigued when they eat things made with wheat, barley and rye. It's a whopping 7 billion dollar industry today.

Are you gluten intolerant? Learn how to make a gluten free chocolate cake.
Other gluten free recipes.

A south American grain that's now looked upon as a super food by nutritionists. It's very high in protein, has got hardly any calories, and is low in cholesterol. So far, so good. The latest stories about Quinoa that is doing the rounds is, that there is a global shortage. Thanks to the rising demand. So much so that it has become scarce in South America, where it's the staple for the poor.

I have cooked with it enough to become a die-hard fan. I bung in vegetables, to make a salad, sometimes I make a risotto, or sprinkle feta cheese on top along with toasted sesame. Each time, it welcomes all the flavors with open arms.

Consume this like a tonic, the health experts say. It's great for your hair and skin, i was told by one of India's most respected doctors. Then I came across people who had health issues reversed and they all seem to be  consuming  this oil as it makes your immune system strong,  it is full of anti-oxidants... A word of advice - try and buy it organic.

Know more: Why coconut oil is good for you?

Eating raw uncooked food guarantees wellness as well as weight loss. The claim: raw food is packed with natural enzymes and nutrients that help the body reach optimal health - and you'll shed pounds. Of course, this diet is as old as time itself but it has evolved with time.

They are slowly but surely making their way into crackers and breads. I regularly use them as a filling in my tart shells.

By definition, it is when Organic produce is sold by producers directly to the consumer. Very simply this cuts past all the middlemen. The farmers or producers interact with the customer directly. Be it vegetables, grains, cheese, honey, sauces, it's all produced pesticide free and available at an affordable price to the consumer.

It's worked the world over, but the urban cities of India are slowly getting there.
Also read: Where to buy organic?

Weekend packages at spas, healthy diets, Ayurveda centers, detoxification takes on new hues and rules. The basic tenet is to give your system a break. You can go raw, you can do Ayurvedic practices, you can even opt for massages that help you detox. An age old technique that has been and still is going strong.

Whip up a health juice and a bowlful of colorful jowar medley.

Watch: Discover the importance of detox with Anurag Sharma of the Baidyanath group

The new kids to have jumped onto the super food bandwagon are the goji berries. In India, you get them dried and packaged. They can be sprinkled onto your cereals, on yoghurt or in a dessert. They are less sweet than cranberries, are slightly chewy and have a radiant pink tone. Did you know that goji berries have been used by herbalists for over 6,000 years in China?

It's creeped into your flour, biscuits, oats and even in packaged foods. It's everywhere. Whole grain means that all parts of the grain kernel -- the bran, germ and endosperm are used.

One of the words that is doing the rounds these days is probiotics and that's made yoghurt culturally 'in'. It has all the good bacteria. Supermarkets are filled with flavored versions, but nothing comes close to the home-made version.

Ragi, also known as finger millet. A health food that is a staple for children in South Indian homes, is making a comeback on the grindstone. It's a very rich source of calcium, is great for the bones and is low in cholesterol. It's now found its way into biscuits, flour, snacks..you name it.
Recipes with the goodness of ragi.

Comments
People are fickle when it comes to their food. Tough to say whether quinoa will get pride of place in restaurant menus or if cold pressed coconut oil will remain a hot trend.
For that, watch out this space.