Alia Bhatt shared a new episode on her YouTube channel of her cooking recipe. She can be seen making a South Indian style Zucchini sabzi in the video. 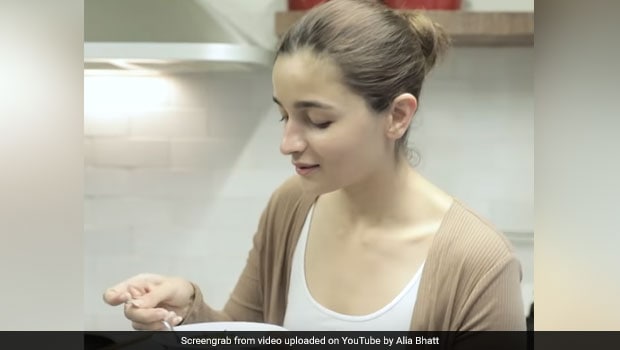 The fitness and diet regimen of celebrities is much sought after. Fans and followers often enquire about what exactly their favourite celebrities eat that keeps them in shape and helps them get glowing hair and skin too. Alia Bhatt is one such celebrity who regularly shares her fitness and diet secrets on her YouTube channel, by the name of Alia Be. She had earlier shared the first episode of her series 'In My Kitchen' in which she made beetroot salad and chia pudding. A new episode of the same series was shared by the actress on her YouTube channel. She can be seen making a South Indian style Zucchini sabzi in the video. Take a look:

Alia Bhatt began by explaining how she was nervous about cooking this recipe since it was a proper sabzi and not just a salad. She was assisted by Dilip, her chef, who according to his bio in the video: exaggerates about how many times Alia's diet changes, gets very excited when there's a party and makes a world-famous mutton dish. The duo was also accompanied by Alia Bhatt's housekeeper Carol. Dilip, the chef, instructed Alia through the video, and with his assistance, Alia Bhatt cooked the recipe in no time.

Talking about the South Indian style Zucchini, the vegetable dish began with the essentials of South Indian cuisine such as rai (mustard seeds), kari patta, green chilli and hing (asafoetida). The Zucchini was then added to the mixture and cooked for a while. Spices and dried coconut were then added to the vegetable. It was cooked for some more time, garnished with coriander and then it was ready to eat.

(Also Read: Alia Bhatt Just Revealed Her Favourite Food And It Will Surprise You)

Meanwhile, the actress revealed her love for another South Indian staple - simple, home-cooked curd rice had with a vegetable like bhindi or pumpkin. Alia Bhatt's housekeeper Carol also told the viewers how particular Alia was with her food, and she would often get cranky when she didn't eat well. The video concluded with everyone trying the sabzi made by Alia, which seemed to be quite delicious, healthy and filling.

Viewers began to respond to the cooking video soon after its release. Some users complimented Alia on her cooking skills and how she had amazing glowing skin even without makeup. Others enquired about her chef Dilip's delicious world-famous Mutton recipe, and asked Alia to make his recipe in the next episode of the series. We hope Alia Bhatt continues to treat us with more such wonderful recipes!