Mouni Roy is the latest celebrity to join the cooking bandwagon, as she recently posted a delicious video of home-made Pav Bhaji 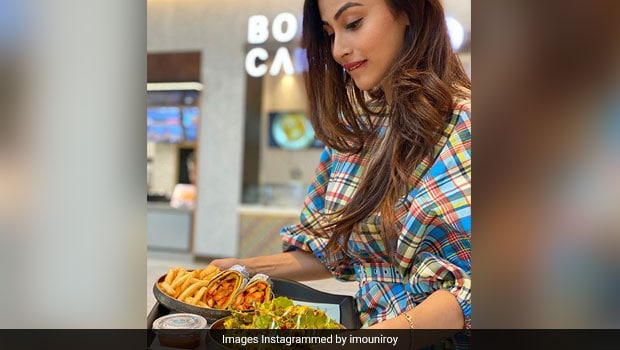 Mouni Roy's delicious Pav Bhaji will get you drooling.

Self-isolation has become a common practice these days as many people are choosing to stay at home. Celebrities too are practicing quarantine to prevent the spread of Coronavirus, and taking up various activities such as spending time with family, painting, exercising and even cooking! Mouni Roy is the latest celebrity to join the cooking bandwagon, as she recently turned chef of which her Instagram timeline is proof. A self-confessed foodie, she posted a delicious video of home-made Pav Bhaji, made by none other than the actress herself. Take a look at her post:

Pav Bhaji is a delicious street food snack popular in various cities of Maharashtra. It comprises a Bhaji made of vegetables like peas, potatoes, tomatoes all mashed together and cooked on a stove. The Bhaji is then paired with Pav buns which are lightly toasted on a tawa in butter until crispy and golden brown. The whole dish is served hot and fresh off the flame.

Mouni Roy listed a number of things she is doing at home while practicing social distancing. She said that she was trying to be productive which includes an hour of praying and meditation, as well as painting and spending time with near and dear ones. Amidst the ongoing rediscovery, Mouni Roy admitted to a 'new found interest' in cooking. "Acquired a new found interest in cooking (dunno how long that'll last) which am trying to participate in everyday (& not eat everything at once)," she wrote in the caption.

It can be said that Mouni Roy has been on a cooking spree of late. This is not all that she has been cooking, as recently she shared a delicious recipe for Veg Pizza which she made at home from scratch. She also had a delicious Italian spread up and ready at home, which included two different Pastas in Mushroom and Pesto sauce, Ravioli, Truffle mashed potatoes, garlic bread, salad and Moroccan spiced salmon. Check out her posts:

Mouni Roy was also plucking out some homegrown produce from her garden including fresh Mint leaves as well as cherry tomatoes. It's interesting to see how she has taken cooking in her stride amidst a period of self-isolation. We hope to see more such wonderful recipes on her Instagram handle soon!