Bored With Plain Chilla? Try This Besan Egg Chilla And Add Variety To Your Morning Meal

Before you start making chilla out of besan, home chef and food blogger Rekha Kakkar advises to "sieve the besan so that the batter comes out smooth". 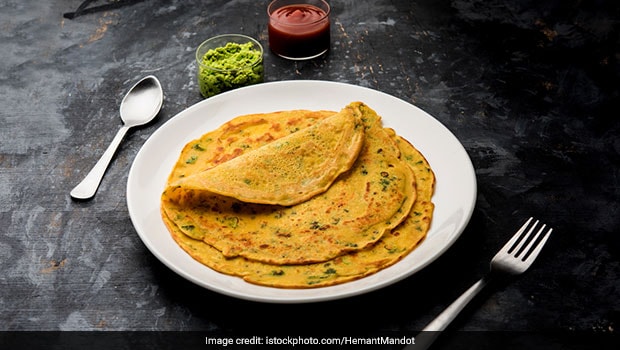 Besan, or gram flour, is one of the most common ingredients we find in every Indian kitchen. Besan comes from ground chickpea, or Bengal gram. Due to its rich nutty flavour, besan (or chickpea flour) is commonly used in variety of dishes - from pakoda batter to sabzi to dessert. The list does not end here. It can also work like magic when included in breakfast, most commonly in form of chilla. It not only tastes good but also boasts of a high nutritional value. According to consultant nutritionist Rupali Dutta, "Besan is very healthy flour and gives a protein-packed start to your day when included in breakfast." Besan is high in protein content, and is often taken as a plant-based protein substitute for eggs. Now, imagine if we also add egg to this protein rich besan chilla? It will surely work as a booster to start the day with all the energy.

Eggs are a good source of quality proteins, and Rupali Dutta informs that an average sized egg (50 gm) contains 6.64 gm of protein. She further stated that egg whites are rich in potassium, niacin, riboflavin, magnesium and sodium, while the yolks provide vitamin A, D, phosphorus, iron and zinc. Some amount of calcium, copper, iron, manganese, phosphorus, selenium and zinc are also present in the yolk. Hence egg works as a wholesome food for body's nutrition.

Before you start making chilla out of besan, home chef and food blogger Rekha Kakkar advises to "sieve the besan so that the batter comes out smooth".

Green chillies- as much you want

Take a bowl and add besan, onion, tomato, green chillies, ginger and water and mix it well and wait for few minutes (add some more water if it turns lumpy).

When you get a light consistency of the mixture, add the eggs, salt and pepper/ajwain, chaat masala and coriander leaves and whisk the mixture well (batter should be liquid-y but not diluted).

Place a pan on a medium-flame oven and put some ghee/butter in it.

Pour some batter on the pan (don't make it thick) and cook it until it turn golden brown and crisp.

Flip the chilla carefully after a few minutes and then cook the other side (ad ghee/butter if needed).

The egg besan chilla is ready for you! You can have it with sauce or pickle or you can place a sunny-side up poached egg on it and have them together. Trust us, the half-boiled yolk of the poach works like a magic in your mouth. All the egg-addicts there, this egg besan chilla with poached egg will surely brighten up your day.