UK Gets First Ever 'Vegan Butcher' With Alternative Meats. Care To Visit?

Rudy's restaurant has opened Britain's first permanent 'vegan butcher' in a corner of North London on the occasion of World Vegan Day. 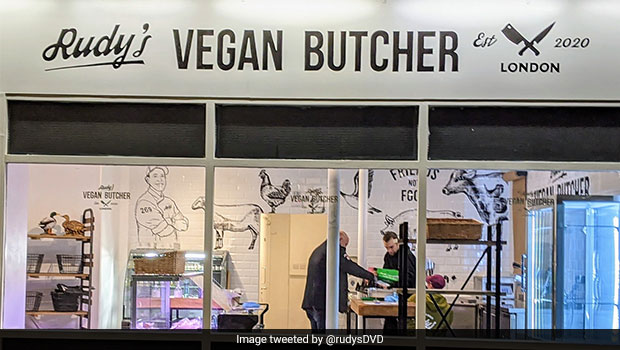 Veganism and vegetarianism was originally considered to be the diet of a limited few. However, with the Coronavirus pandemic, a large section of the global population is planning to or has already cut out meat from their diet. World Vegan Day was also recently celebrated with much aplomb on 1st November, and a UK-based food company decided to make an interesting statement on the day. Rudy's restaurant opened Britain's first permanent 'vegan butcher' in a corner of North London on the occasion of World Vegan Day.

Demand for vegan products has surged in recent years in Britain, with increasing numbers of people cutting out animal-derived ingredients completely, while others reducing the amount of meat and dairy they consume each week. Law firm EMW reported a 128% jump in new trademarks registered for vegan food in the UK last year, with both large corporates and small companies registering such trademarks as vegan ice cream and pastries etc.

(Also Read: Covid-19: 5 Ways The Epidemic Will Change The Way We Eat)

The plethora of people converting to vegan diet has given rise to an all-new industry - that of vegan or meatless meat. Also known as mock meat, vegan meat is derived from plant-based sources such as tofu, soy and more. Rudy's takes the concept of vegan meat a step further by offering meat-free versions of traditional products. Thus, bacon becomes 'Baycon', sausage becomes 'Soysage', and so on. These substitutes are made from soya and seitan.

"People understand what it is that we're selling," co-founder Matthew Foster told Reuters. "It's all designed to emulate meat. It tastes like meat, it's got meat-like texture." Foster's team had earlier started out as a vegan diner in 2017. They are now looking to offer goods, including whole dinner kits that can be prepared at home.

We wish them all the very best for their novel initiative and hope that more such eateries will follow suit!