Why is Everyone Around Me Turning Vegan? 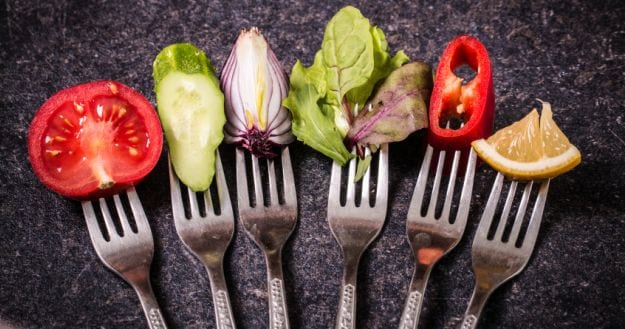 The idea of giving up is never convincing, especially when it comes to food. I don’t believe in holier-than-thou hippie health food but good nutrition matters. And so, I’ve always been curious to know what this new obsession with veganism is? Let me be honest, WHO’s latest revelation about processed meat being carcinogenic did get me a bit worried. Sometime back, there was also a study which showed that a type of iron in red meat can increase the risk of heart disease. These reports got me thinking if it’s time that carnivores and vegans got along.

Going vegan for animal rights is a story as old as time. With Hollywood celebrities like Beyonce, Carrie Underwood and Brad Pitt living a vegan lifestyle it’s certainly gone glam. ‘Vegan for weight loss’ – their curves will tell you. “This is easy to understand because the Western diet is heavy on sugars, processed meat and refined cereal. When you decide to go vegan you cut down on saturated fats, cholesterol and increase fiber from fruits and vegetables and are consuming fewer calories. But there’s a lot more that a vegan approach can deliver,” says Dr. Rupali Datta, Chief Clinical Nutritionist, Fortis-Escorts Hospital in New Delhi.

How is it different than being a vegetarian?

A vegan diet typically consists of only plants, such as vegetables, grains, nuts and fruits. Vegans don’t eat anything that comes from animals which includes meat, honey, eggs, milk and dairy products. This makes it different from vegetarian who may consume everything else except meat. American dietician, Jack Norris shares in his book, ‘Vegan Life’, “Veganism starts with vegetarianism and carries it through to its logical conclusion.”

“Veganism is not just about changing your diet but it’s more about taking a philosophical, ethical and moral stand. As vegans, we refrain from using animal products for food, clothing and entertainment, says Holistic Health Coach Nandini Gulati.

Veganism is on trend right now and so are antioxidants, fiber and micronutrients. By now you must have heard about the crucial role that these nutrients play in your diet. “The vegan diet is abundant with these compounds that are required for wellness and vitality. Those who consume a lot of animal products might fall short on these nutrients.” says Dr. Datta.

You’re probably thinking about protein problem and other deficiencies that vegans may have to face like iron and B12 which are primarily derived from animal products but Dr. Datta clarifies, “Meats are a complete source of protein which means that they contain all essential amino acids that your body requires. But you can get complete proteins by combining cereals and pulses. The amino acid profiles of both compliments each other making it a form of complete protein as good as meat. In fact, whey protein is superior to egg protein. Sprouting or fermenting foods is another way to improve the quality of protein in vegetarian foods. “

“Vegans may not get enough B12. In stress periods, you can depend on food supplements to meet your requirements under your doctor’s advice. But this is common for vegetarians as well. Moreover, meat or no meat, a large part of our population is suffering from protein and iron deficiencies.” she adds.

What about calcium from milk which is an absolute essential for growth and development or so we’ve been told? Meenu Nageshwaran, who organizes cooking workshops, pointed out some fascinating facts in this regard. “Scientifically, our body stops absorbing casein (protein) from milk after the age of 3, so we don't really need it. Being acidic in nature, it actually leaches the calcium out of the body and is more likely to cause inflammation. Statistics reveal that countries that consume the most milk are those with highest number of osteoporosis cases. The highest amount of calcium actually comes from sesame seeds that are hugely ignored in our diet,” says Meenu.

Chris Kresser, a globally recognized leader in the fields of ancestral health, explains on his site that dairy products are acidic in nature and to the normal blood pH alkaline minerals such as calcium from the bones are used, thus decreasing bone density and increasing the risk of osteoporosis.

I could somewhat agree. The most thriving communities in the world from the Hunza Tribe in Pakistan where women don’t hit menopause till the age of 65 to the Okinawa diet from the Japan where people are more likely to live to 100 mostly focus on grains, nuts, soy and seeds. There is no mention of dairy products and not without reason.

“Meat and dairy are the most polluted industries. We’re not just ingesting growth hormones and antibiotics way beyond permissible limits but also being affected by the stress hormones that these animals may release when they are slaughtered for meat or during milking. Why are we drinking the milk of another species and going against the nature when no other mammal in the food chain does it? Look at our ancestors, they’re diet was mostly raw foods but they did get all their nutrition and lived longer lives. Didn’t they?”  remarks Meenu.

PETA has been fighting a long battle with the dairy industry. In one of their videos, they’ve demonstrated what happens behind the scenes. Cows typically lactate for 10 months after birth and then are inseminated again. It continues till they can reproduce after which they are sent to the slaughter house. The calves are taken away the same day and fed milk replacements which may even include cattle blood. They grow up to turn into milk making machines like their mothers. The natural cycle is destroyed and this, according to them, makes cow’s milk a 'cruel and unhealthy product'. On the flipside, Dr. Datta doesn't really recommend scrapping milk off the menu but agrees that the minerals in milk can be derived from other healthier sources.

Meenu turned vegan four years ago when she was diagnosed with Type 2 diabetes. By switching to a vegan diet she managed to reverse this disease which has become a serious health concern in India.
Nandini Gulati, who is also the author of ‘Guilt Free Vegan Cookbook’, shares the same sentiment, “I explored the vegan diet for health reasons when I was suffering with hypertension and weight issues. After four years of being vegan, I feel an upsurge of energy, enjoy better immunity and I’m far more positive in my thinking. I’ve learnt to question where my produce comes from. Don’t think that you’ll be deprived of anything. In fact, those who are new to veganism are encouraged to start with vegan alternatives to their favourite foods. From dairy-free yogurt made with rice and peanuts to nut milk, there’s a lot to discover."

She busts one of the biggest myths about the vegan diet that most of us believe, "When you are turn vegan, you are not eliminating any food groups but products that your body may not need. The same nutrients can be derived from healthier alternatives. If you look at the animals we feed on, they are also getting their nutrients from plants.”

Promoted
Listen to the latest songs, only on JioSaavn.com
In the same context, Harvard Health states the following - "Compared with meat eaters, vegetarians tend to consume less saturated fat and cholesterol and more vitamins C and E, dietary fiber, folic acid, potassium, magnesium, and phytochemicals (plant chemicals), such as carotenoids and flavonoids. As a result, they’re likely to have lower total and LDL (bad) cholesterol, lower blood pressure, and lower body mass index (BMI), all of which are associated with longevity and a reduced risk for many chronic diseases." The fact that the many people who've decided to go the vegan way choose to stay vegan speaks for itself. Alicia Silverstone, the ‘Clueless’ star, used to battle asthma, insomnia, acne and bloating but after living a vegan life, the actress says she’s never felt better.

I'm convinced that veganism is not just another fad diet. It’s a change in lifestyle – a conscious choice you make. “It’s also going back to your roots. From grains like amaranth and to spices like kachi haldi, a lot of our ancient foods have been neglected for long. Today, our diet mostly consists of foods that are easily accessible and we eat much more than what we need. A vegan diet compels you to switch to smaller portions of local, seasonal and healthier produce,” says Meenu.

CommentsBoth, British and American Dietic Associations agree that a vegan diet is safe for all stages of life as long as it is planned carefully. You can’t just eat what you are eating right now without meat, you’ll be left drained and deprived. Your meals should be balanced with all nutrients and major food groups in adequate quantities. If you feel inspired to go green, start by meeting a nutritionist to get you familiar with healthier vegan alternatives.