Viral Photo: An amused mother revealed how her naughty child used her phone to order food online from McDonald's worth approximately Rs. 5,500/- 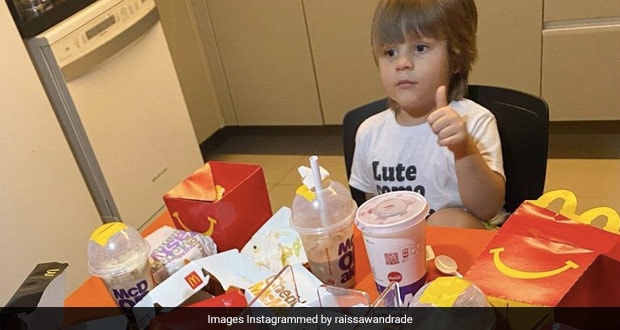 Viral Photo: This picture has taken the internet by storm.

If there's one thing that amuses the internet to no end, it has to be the adorable antics of toddlers. There are numerous videos of children doing goofy things in videos that go viral. However, a four-year-old from Brazil took his mischief to another level. A recent post on Instagram by an amused mother revealed how her naughty child used her phone to order food online from McDonald's worth 400 Brazilian Reals or approximately Rs. 5,500/-. Take a look:

In a passionate post on Instagram, the boy's mother shared the anecdote with a picture of her son sitting with a humongous pile of food. "It was not the first time that this had happened," she said in the caption. She went on to describe the exact quantity of food he ordered, which included 6 Hamburger meals, 6 Mc Happy snacks, 8 extra toys, 2 big portions of chicken nuggets with 12 nuggets each, 1 big potato chips with bacon and cheddar, 10 milkshakes, 2 top sundae strawberry, 2 apple tartlets, 2 McFlurry, 8 water bottles, 1 grape juice and 2 extra sauces. "I laughed, cried and then sat down to eat and take milkshake toasting this fast-food Monday. Unbelievable, my people," she laughingly concluded.

The post went viral on Instagram, garnering over 1 lakh likes and counting. Users were extremely surprised to see the humongous order placed by a small boy. "That boy is a genius," exclaimed one user while another wrote in the comments, "I really wanted to see your face when all this came!"

What did you think of the hilarious incident? Have you experienced something similar with the children in your life too? Tell us your thoughts in the comments below!