Toronto-based reporter Bryan Passifiume asked for extra cheese in his bagel, but what he got in return shocked the internet. 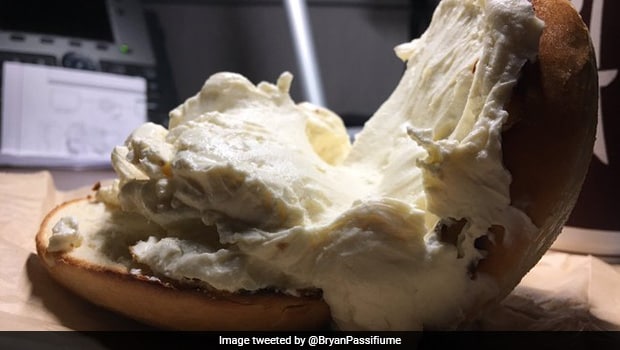 Bagel and cream cheese is a staple breakfast in many parts of the United States and Canada. The simple dish comprises a circular bread-like bagel cut into half and slathered with cream cheese. The more the cream cheese the better, which is exactly what Toronto-based reporter Bryan Passifiume had in mind when he headed to a McDonald's outlet in his city for breakfast. He asked for extra cheese in his bagel, but what he got in return shocked the collective conscience of the internet. Take a look:

More photos of this monstrosity. I ordered extra cream cheese as they usually just apply it like butter, but this is clearly just an exercise in passive-aggressiveness. How do I possibly eat this? pic.twitter.com/XM70yMrnqp

Bryan Passifiume had picked up the bagel on his way to work, and as soon as he opened it he was in for a rude shock. The bagel was teeming with cheese more than the amount that was required - a sight which was pleasing to look at but an 'exercise in passive aggressiveness' according to Bryan. There was approximately two inches of just pure cream cheese in it. The bagel which was supposed to be just another regular item of the fast food industry soon became viral on Twitter.

The person who had shared the tweet himself started comparing the exorbitant height of the cream cheese bagel to daily objects, resulting in much laughter around the whole topic. Twitterati too reacted to the viral bagel from all parts of the world. Some users referred to it as a 'McMonstrosity' while others couldn't see what the problem was. Take a look at the hilarious reactions:

Just looking at it makes me want to throw up

There was a staff at the McDonald's by our house who would load up my mother's bagels like this if she asked for “extra cream cheese.”

So she'd bring a tiny Tupperware to scoop the excess in for later toasts.

That's all cream cheese?!
Wtf...I thought it was just a gross lookin McMuffin. 😂

I can't get Big Mac sauce on my cheeseburger and this guy got $300 worth of cream cheese on one bagel! 🙌🏽

Dude, I don't see the problem. That looks amazing!!!

Can I get one like that here in the US @McDonalds

Listen to the latest songs, only on JioSaavn.com
— Chillieh 🐧 (@PossePenguin) February 25, 2020

You asked for extra. You got extra

While the sight of the bagel couldn't be digested by many, other people responded quite funnily to the whole incident. Another hilarious chapter to the story happened when the user returned to have the cream cheese bagel again from McDonald's, and they said they had run out of cream cheese entirely! McDonald's Canada responded to the user's claims and said that they would look into it. But the bagel definitely went down in the history of social media!