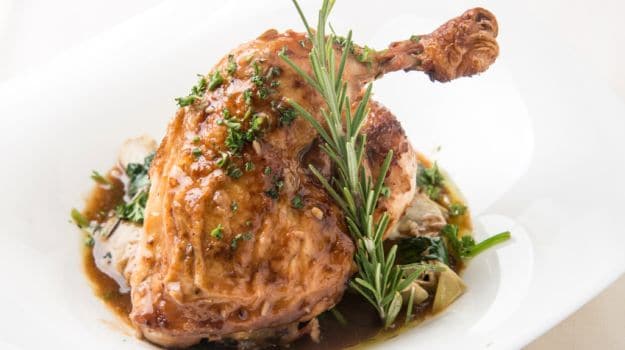 It was the centrepiece of Avadhi lavishness. But also a recipe terribly intimidating. What really was the Murgh Musallam, and can you still make it?

Murgh Musallam, to me, was always that vague, old-fashioned dish that everyone spoke of as a delicacy but no one quite knew how to cook. As a child, I imagined it to be one of those “Colonial” era dishes that had crept into the Avadhi repertoire—cooks of the various taluqdars (land owners, awarded titles first by the Mughals, then by the British) going out of their way to concoct elaborate recipes, partially based on European dishes, to dazzle guests of the various “rajas” and minor so-called royalty, spread across UP. Like Shatranj Ke Khiladi, the movie, these dishes brought to mind images of decadence and the collapse of an old, effete order, focussed on manners and hyperbole even as its power and prestige waned.

Murgh Musallam was the taste of that nostalgia. Except that no one I knew had ever cooked or even eaten it. It was also a copy cat dish, I believed, trying to Indianise the English/European “roast”. Chicken, as a meat, assumed mass popularity only with the influx of Punjabi refugees post partition, who brought with them the hardier food of the frontier. In contrast, the earlier Avadhi recipes, seemed to have favoured red meat. And the fowl as a bird had in fact only started getting cooked in the Gangetic plain after the advent of the colonialists, who were also responsible for the first poultry farms. At least that was my reading of history.Till I happened to discuss this with Salma Husain, food historian and writer of The Emperor’s Table, the superlative book on the food of the Mughals. According to Salma apa, references to roasted fowl can be found in ancient Indian literature—in Tamil literature of the 3rd century BC and in fact even amongst the sacrificial meat dishes served by Dashratha, in the Ramayana.  The fowl was also to be found on the table of the Turkish-Afghan kings who ruled Delhi before the Mughals—KT Achaya, whose guide to Indian food is the definitive tome on much of Indian food history, mentions chicken pulao and kebab in the reign of Balban and the Tughlaqs too were fond of the fowl, apparently.

Complicated red meat dishes, however, started getting favoured in the royal kitchens during the reign of the later Mughals with the obvious Persian influence of the wives. But Salma apa points out that the Musamman, referred to in the Akbarnama as one of the 30 dishes on the emperor’s table, was possibly a precursor to the Murgh Musallam.

Interestingly, she says, the spices used in the recipe, the method of cooking (taking the bones out of the whole chicken through its neck), and the stuffing of meat and boiled egg is almost similar to the roast fowl recipe from Medieval Europe, including the one mentioned in the 14th century Latin book, Tracta.

So, if any culinary exchange happened, we need to look for it possibly before the Colonial period.

But what really is the Murgh Musallam? For those of you, who have never heard of it, it is that centrepiece of Avadhi cooking, at once exotic and mythical in status—the very acme of culinary refinement practiced in that culture. A whole bird (musallam means “whole”) would be cleaned out, stuffed with nuts and dried fruit, and then roasted, cooked in some jus, and there would be a spiced gravy usually, finally poured over it all. It is a complicated recipe. The dish was served up by the Lucknowi elite. And now that that age has passed, it is one of those heritage “wow” dishes in danger of being lost forever.

While, there are versions, which involve the chicken to be stuffed with mince, my friend Saimi Sattar, who belongs to an old Avadhi family from Kanpur, related how her grandmother used to make it—the bird entirely stuffed with mava (khoya) and dried fruit.

For the brave-hearted, two excellent, well researched recipes can be found in two cookbooks on the cuisine that I swear by. They are old publications but bring to light the nuances of that “royal” or at least elite and inventive style of cooking that Awadh and the princely states symbolised like no other. The first is the book on Avadhi cooking by Jiggs Kalra and Pushpesh Pant who did so much work to research old Indian recipes from different regions.

The book has a recipe for Bater Musallam—using the smaller quail instead of chicken. The bird is cleaned, marinated in yoghurt, stuffed with chicken mince, almonds, pistachios and spices. The gravy is an elaborate one too using fried onions, almond and char magaz pastes for the body, yogurt as the souring agent and spices.

The bird is first braised in stock and then roasted in an oven with the jus. And finally the gravy is poured on the birds, basted with butter and these are further roasted till the gravy is brown and the birds well done.

CommentsThe Sailana cookbook by Maharaja Digvijay Singh is one of my most prized ones when it comes to recipes of this sort, based on Mughal cooking. It is one of the best you could buy. The Sailana Murgh Musallam is a delicious delicacy—the bird is stuffed with a mix of cashews, poppy seeds, dry coconut, chopped almonds,raisins, ginger and spices in ghee. Then the bird is fried till golden brown. At this stage, milk and water are added and the chicken cooked till tender. Curd is now added ad the extra filling to give a thick gravy. If you have the dexterity to cook it, put the Murgh Musallam on the table. But make sure to serve it with boiled egg; that is also the hallmark of a true musallam.