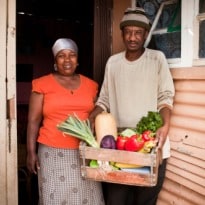 "There are people in the world so hungry, that God cannot appear to them except in the form of bread."― Mahatma Gandhi

The current scenario of world hunger is heart wrenching. According to the Food and Agriculture Organization of the United Nations, "A total of 805 million people are estimated to be chronically undernourished."

World Food Day celebrates the creation of the Food and Agriculture Organization of the United Nations on October 16, 1945 in Quebec, Canada. Since then, every year 16th October is commemorated as a day that calls for people around the world to take action against global hunger.

How is Global Hunger Measured?

Interestingly, it is not just the number of hungry people that one needs to look at. Those who lack proper nutrition and fall prey to under-nutrition or malnutrition also add much to the problem.

The fact that children are dying due to lack of proper nutrition explains a great deal about the availability and access to proper food across the globe.

Hunger and other factors defined: Image via Global Hunger Index report, 2014
Apart from a country's economic status and rate of development, a lot of factors are taken into consideration to decide the hunger index score.For some countries like Iraq and Comoros, disparity in nutrition levels and rise in hungry people has been an outcome of a prolonged conflict or an ongoing political instability.

Facts about global hunger that will alarm you


Where does India stand?

As far as India is concerned, we have taken a substantial leap on the Global Hunger Index. According to a recent report, India has gone up to the 55th position as compared to last year's 63rd. This means that there has been significantly lesser number of hungry and malnourished people across the country. The credit goes to the several government programmes that were rolled out to tackle malnutrition. (Hunger Situation Improves in India: Global Report)

You and I can bring about a change!

Ironically, the total global produce is more than enough to feed 7 billion people but in most of the countries some people can't even afford a proper meal for themselves. One of the reasons for this dichotomy is food wastage; it is one of the biggest parasites of the 21st century.

The Food and Agriculture Organization of the United Nations explains, "The full economic, environmental and social costs of food waste amount to approximately 2.6 trillion US dollars annually."

Watch this video to understand the repercussions of global food wastage and what each one of us can do to save our resources and help feed the world better. You can do your bit by avoiding food wastage at your home.