The Other Hyderabadi Biryani With a 300-Year-Old Past 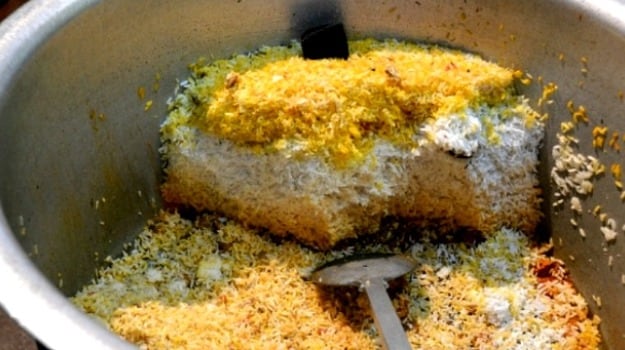 The Nawabs were known for their exceptional hospitality, especially towards those who visited from Hyderabad. The devdi was known to serve two meals to everyone visiting from Bidar and around and the 'Kalyani Biryani' was the most popular dish served by them. Today, the devdi of the Kalyani Nawabs stands in ruins, which goes to show the sad state of affairs. It's disheartening to see that we're unable to preserve our historical heritage through monuments. But on the brighter side, we've managed to capture the wonderful past and glory in our food, that is in the Kalyani biryani.

In 1948, the Indian government took over Hyderabad State in what was named 'Operation Polo'. These were tough times for the nobles of the Hyderabad state, especially the Kalyani Nawabs. It is believed that over a period of time, the cooks of the devdi spread out and took up jobs elsewhere in the city. Some joined existing food joints while others started their own roadside stalls or bhandi.

A certain gentleman by the name Dawood started his own bhandi, making and selling biryani according to the traditional recipe as he knew it. The Kalyani Biryani is made with small cubes of beef, regular spices, onions and lots of tomatoes. It's an exceptionally taste biryani which is why gradually, it grew in popularity.

Sometime in the 50's, Dawood set up a permanent stall behind the dargah in Murgi Chowk, close to Charminar. There might have been other cooks who practiced and propagated the Kalyani biryani school of thought but no one became as popular and as successful as Dawood. And he aptly named his shop 'Kalyani Biryani', because that's what he did best.

I feel it's unfair to label the Kalyani biryani as a poor man's Hyderabadi biryani. I'd say it isn't poor, but it's definitely unpretentious. Hyderabad is of course, far more affluent than what it was in the 50's and the relevance of the much cheaper Kalyani biryani has probably dropped. But it's still pretty popular in the outskirts of Hyderabad and in the less affluent Muslim areas of Hyderabad. And of course, still pretty dominant in Bidar and its surrounding areas.

Dawood's shop in Murgi Chowk is a pale shadow of what it used to be. He passed away some years ago and his sons now run it. The place isn't well maintained but everything in this biryani shop looks exactly how it did 30 to 40 years ago.

The Kalyani biryani still tastes pretty decent but the locals of Murgi Chowk tell me that it used to be much better. And if you're a food and history buff, then it's definitely worth a visit. It's an important part of Hyderabad's culinary past and an effort has to be made to preserve and support these gems.

Chowder Singh started blogging in November 2011 on Indian street food, small restaurants and hole-in-the-wall kind of places that in spite of producing brilliant quality food, are largely unrecognised outside of their localities. He believes that these are the real heroes of Indian food, who have been consistently putting out their family recipes over many years and now will hopefully get more recognition for the superb work that they've been doing.