7 Incredible Benefits of the 'Forbidden Rice'- The Black Rice 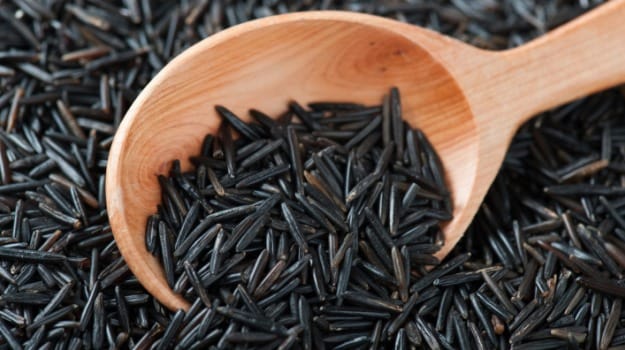 An essential part of the Asian palette, rice has for long been a 'hot' topic of discussion amongst health and fitness enthusiasts. Some suggest shunning it altogether while some advice that it's better to switch to healthier alternatives like brown rice, red rice and quinoa. Amongst these 'healthier' options, nutritionists have also started recommending a certain 'forbidden' variant of rice - the black rice. Yes, you heard us- The 'forbidden rice'. The secret of the intriguing nomenclature goes back to Ancient China, where a black variant of rice was consumed by a host of Chinese kinsmen for betterment of kidneys, stomach and liver, until a handful of noble Chinese men took possession of every grain and withheld it from public consumption. Black rice then became a property for the royalty and the wealthy only in Ancient China. Black rice continued to be cultivated but only for the elite classes, in limited quantities and under strict surveillance. The common folk were prohibited from growing or consuming it, and since then it earned its much renowned label - the forbidden rice.

Black rice is no longer forbidden, but it is cultivated in relatively small amounts, compared to other types rice varieties.The whole grain rice also packs umpteen health benefits.  Black rice or the forbidden rice (Chinese) is a rare and a very old variety of rice that has been growing in India for centuries.  It is mainly grown in the North East region (called as Chak Hao) and the southern parts (called as Kavuni in Tamil) of India. Here are a few benefits of Black rice.

Enumerating the benefits of black rice Shilpa Arora, Macrobiotic Nutritionist and Health Practitioner, says" It is loaded with anti-oxidants especially anthocyanin which is great for diabetics, heart patients and helps brain activity. Its great for skin and hair due to its Vitamin e content. It is also loaded with fibre so it does not spike blood sugar levels. Its rich in iron, hence a good source for vegetarians."

The deep black or the purple hue of the black rice is a marker of its high antioxidant properties. Similar to blackberries and blueberries, that appear deeper in colour because of their high content of anti-oxidants. The outermost layer of the grain (the bran and the hull), contains immense amounts of the antioxidant-anthocyanin. In fact the amount of anthocyanin contained in black rice is higher than any other grain, including brown rice, red rice, red quinoa, or other colored whole grain varieties.

Anthocyanin can help prevent cardiovascular disease, restricting free radical movements which can cause variety of diseases like diabetes and even cancer. It can also help improve brain function and reduce inflammation .

White rice and other refined grains are stripped of their high nutrient content and beneficial properties in the milling process. Majority of the nutrients of rice are present in the outer layer, the hull and the bran, which are only retained in whole grains. Since black rice doesn't undergo any refining or processing, it is able to retain its antioxidants, vitamins, minerals, and fiber. Black rice also contains important antioxidant- Vitamin E, which is useful in maintaining eye, skin, and immune health.

The phytonutrients present in black rice help cleanse the body of disease causing toxins (caused by free radicals). Black rice helps the liver (one of the most significant detoxifiers of the body) eliminate unwanted substances through its antioxidant activity.

(Also read: 5 Healthier Alternatives to White Rice You Must Try)

The black rice has about 3 grams of fiber per half cup serving. This rich fibre content helps regulate the bowel movements, prevent constipation, diarrhea and bloating. The fibre helps bind the toxins and waste within the digestive tract, and flush it all out of the system on completion of the cycle of digestion. Fibre also gives your body a satiated feeling after consumption which prevents you from binging into other fatty food, thus aiding weight loss.

(Also read: 5 Fiber-Rich Foods You Should be Eating Everyday)

Benefits of black rice: The black rice has about 3 grams of fiber per half cup serving.

To ward off the risk of diabetes and obesity, it is advised to consume whole grains instead of just refined carbohydrates. The entire bran of the grain is where the all the fiber is stored in the black rice. The fibre is able to help glucose (sugar) from the grain to be absorbed by the body over a longer duration of time, (Since fibre take the longest to digest), thereby maintaining consistent sugar levels. Read A diabetic's guide to eating rice too.

(Also read:7 Things You Should Do Regularly to Reduce the Risk of Diabetes)

Benefits of black rice: To ward off the risk of diabetes and obesity, it is advised to consume whole grains

For people battling obesity, black rice is the best variant of rice to consume. Full of fibre, black rice not only gives you the feeling of being full, thus preventing overeating; studies show that the rice variant can also help prevent insulin resistance, which is often linked to the risk of developing diabetes and obesity.

Benefits of black rice: For people battling obesity, black rice is the best variant of rice to consume

The reason your nutritionist has been asking you to cut down on your rice consumption is because of its high carbohydrate versus very less protein content. Proteins are very essential in building muscles, and cutting down on excess weight. Black rice also offers a minutely increased amount of protein content over other 'healthier variants'. It contains 8.5gms of protein in a 100gms serving, while brown and red rice contains 8gms and 7gms of protein respectively for the same serving. On the other hand, polished white rice contains only 6.8gms of protein.

Eating black rice may have a positive impact on your healthy cholesterol levels too. The anthocyanins phytochemicals found in black rice, reduces the Low Density Lipo-protein (LDL) cholesterol also known as the bad cholesterol, which is a common contributor to cardiovascular diseases. It also brings down the total cholesterol levels. The book 'Healing Foods' by DK Publishing, notes, black rice has been proven to actively reduce atheroschlerosis (hardening of the arteries) as well.

Benefits of black rice: Eating black rice may have a positive impact on your healthy cholesterol levels too

Go ahead, enjoy this healthy rice. Don't forbid yourself from cashing in on the health benefits of this 'forbidden ' variant of an era gone by.