How Fibre Can Help You Lose Weight 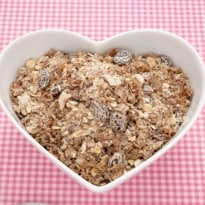 Fibre forms an essential part of our daily diet. Not only is fibre good for our digestive system, it has also been linked to the reduced risk of colon cancer and type 2 diabetes. Health experts will tell you that foods with high fibre makes one feel full and satiated for long which is why they easily fit in your weight-loss strategies. A latest scientific study agrees with this notion.

According to a study published in the American Journal of Clinical Nutrition, a fibre-rich diet can help in shedding those extra kilos. Polydextrose and soluble corn fibre may cause a shift towards beneficial bacteria in the gut and assist in weight loss when made part of a long-term, daily diet. "These two fibres look like they could be beneficial when included in a balanced diet along with whole grains, fruits, vegetables and legumes," said Hannah Holscher from the University of Illinois, US.

The team was surprised to see a shift in the Bacteroidetes:Firmicutes ratio. It was found that fibre supplements had caused a shift towards Bacteroidetes which are considered as good gut bacteria. Both Bacteroidetes and Firmicutes belong to the bacteria domain. Firmicutes are often associated with obesity in mice modules as well as in humans, hence this shift was seen as a positive one.

Another study conducted earlier this year at Imperial College in London states that dietary fibre contains a chemical called acetate which is released when plants and vegetables are digested by the colon bacteria. This chemcial sends signals to the brain to stop eating. Foods loaded with fibre include whole-grains, cereals, leafy vegetables, beans, mushrooms and more.