A Beginner's Guide to Eating Sushi

For a first timer, the art of eating sushi can be a formidable task. But the tricks are fairly simple if you don't let the presentation get to you. 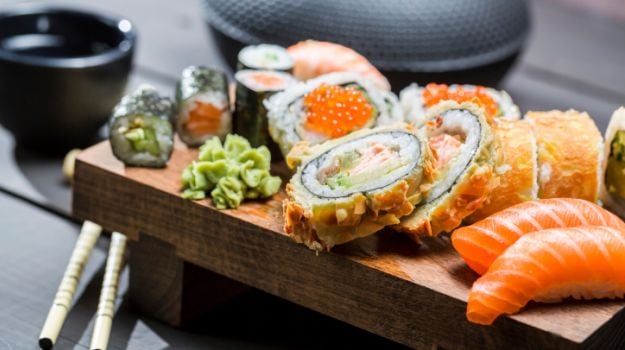 Sushi can be a formidable dish for beginners.

At some point in time, what possibly began as a method to preserve fish in the Mekong Valley of Southeast Asia, the sushi travelled to Japan and over the centuries of its existence reached such high levels of evolution that today it's pretty much an art form.

In the American documentary Jiro Dreams of Sushi, Ono Jiro says, “The most important part of making good sushi is this: creating a union between the rice and the fish.  If they are not in complete harmony, the sushi won't taste good.” And he could not have been more accurate.

A popular feature in Japanese cuisine the world over, the modern sushi rarely looks like its original self today. Chef Kamlesh Joshi of EDO, ITC Gardenia Bengaluru has been working with Japanese food for more than a decade, and says that when he began his career in New Delhi, it was the one cuisine that surprised him immensely. “I couldn't imagine people were eating raw fish,” he says.

The Art of Eating Sushi

For a first timer, the art of eating sushi can be a formidable task. But the tricks are fairly simple if you don't let the whole presentation of it get to you. Sushi is typically served with three condiments on the side - soy sauce, a dollop of wasabi (a dry green paste), and gari (pickled ginger). Interestingly, it's hard to source real wasabi, which is actually a plant, outside of Japan. Most restaurants replace it with horseradish, which has the similar pungency of the wasabi plant, mustard, starch, and the green food colouring of course. Real wasabi is way more pungent than we are used to.

Traditionally, sushi is eaten with hands, and this is also why you ought to wash your hands before you start. In the case of a nigiri, you need to turn the sushi around (rice up, fish down), lightly dip it into the soy making sure that you don't dip the whole thing in, and eat it. For convenience what you can also do is mix the wasabi in the soy and then dip the sushi into it. Usually, chefs smear a little bit of wasabi between the fish and the rice; the extra bit is given if you want more.

How to cook sushi rice

Nori is one of the primary ingredients that is used while preparing sushi as it acts as a wrapper to hold certain types of sushi together. It is a kind of edible seaweed, and normally available as paper-thin green sheets in the supermarkets.

Sea Spaghetti in the Supermarket: the Unstoppable Rise of Seaweed

There aren't too many Japanese restaurants in the city, but the numbers are enough to keep sushi lovers happy; in fact, most people in the city don't even veer beyond the sushi when it comes to eating Japanese food.

You can't really ‘know' sushi, unless you've spent years meditating before it, or eaten every possible sushi that has come out of every restaurant worth its name. However, here are a few basic ones to help you get started.

It's a traditional roll and is normally smaller than a standard sushi roll. When made with tuna, it's called a Tekka Maki. A hosomaki usually uses a single ingredient, and the nori sheet is on the outside. It's a popular roll too, probably because you can pop a whole one into your mouth without having to make a mess.

Uramaki is not exactly a traditional form of sushi but then again it's as popular as some of the older varieties. In this version, the main ingredients (in this case avocado and salmon) are wrapped with nori first and then coated with rice and made into a roll. Slight garnish such as flying fish roe or sesame seeds adds a bit of crunch and colour to sushi.

It looks like a waffle made of nori and stuffed with rice and other ingredients. In this, the chef uses shiitake mushroom (braised in soya, mirin, and sugar) and hand rolls a nori sheet to form a cone and then stuffs the rice in along with mushrooms. It's important that the ingredients pretend to spill out of the cone. To eat a temaki, there are two rules: first, eat it quickly, before the nori sheet loses its texture and ends up feeling like a piece of cloth, and second, use your hands.

(Japanese Food Season Kicks off in India with Sushi Class)

Earlier known as Edo-Mae Zushi, mostly because it was made with fresh fish from the Edo Bay, today's nigirizushi is actually just affordable food for common people. It has come a long way though, and is one of the most popular sushis in Japan and other parts of the world. A nigiri is nothing but a mound of vinegared rice topped with a fish of your choice – salmon, tuna, cuttlefish, red snapper and shrimp are some of the popular ones. Sometimes a nigiri is tied with a thin nori strip to keep the rice and fish in place. In nigiri, slicing is very important, says chef Joshi, and adds, “It depends on the kind of fish you're using. Some might require thin slices and some might need slightly thicker slices. You can also swipe a bit of wasabi on the rice ball and shape it by hand.”

The gunkanmaki dates back to the 40s, so it hasn't been around for too long. It's an oval-vertical sushi where a ball of rice is wrapped with nori, leaving some space on top. The empty space is then filled with different ingredients such as scallops, roe, etc. One can say that it's an offshoot of the nigiri, but is quite different too.

A contemporary version of sushi, this roll is best for those who don't like to eat raw fish, and is derived from the uramaki. In this version, a single piece of tempura prawn is taken, rolled in nori, and then covered with rice. Using a bamboo sheet, it is shaped. Once that's done, the roll is topped with sliced salmon and then torched, resulting in an almost cooked sushi roll. It is garnished with a drop of Japanese mayo and edible flowers.

The rainbow roll is just a prettier version of the uramaki, and very new. One can use different kinds of fish (salmon, tuna, shrimp, red snapper) and pair with it cucumber, avocado, green onion shoots etc. before making it into a roll. The roll is then topped with alternate slices of fish and avocado/cucumber, and cut into sections before being served.

This is probably one of the oldest and simplest forms of sushi to have ever been devised. And there are no rules here either. A bowl of sushi rice is topped up with different kinds of fish (raw) and vegetables and even garnishes. But that's in the Edo region. Other parts of Japan tweak the combinations and ingredients a bit and even the serving style could be different. No wonder that it's called Scattered Sushi.

When the sushi travelled to the US of A, it became kind of hard for people to digest raw fish. That's when the California Roll was born. It's a deviation from the uramaki and is typically made with crabmeat and cucumber. The Boston Roll on the other hand, which is a variation of the California Roll, poached shrimp replaces the crabmeat. In Bengaluru, it continues to be one of the most popularly served and eaten forms of sushi.

Promoted
Listen to the latest songs, only on JioSaavn.com
A specialty of Osaka, this sushi is horizontal and rectangular, pressed down into shape with the help of a traditional wooden mold. For sushi virgins, the good news is that none of the fish used is raw. Plus it looks really pretty, and clean. Here too, the rice is on the outside.