Benefits Of Masala Tea: Prepare A Cup Of Kadak Masala Chai To Kick-Start Your Day

Masala Chai! The name is enough to make a chai-lover's morning better. Here we have multiple benefits and a quick and easy recipe of masala tea to prepare at home. 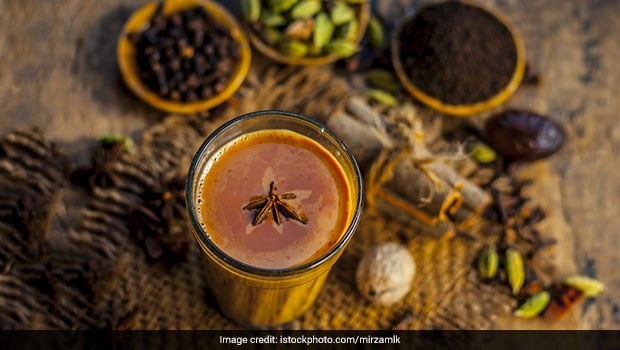 Summer, autumn, winter or spring, no matter what the season may be, tea is a constant beverage for many people in India. Sipping a cup of piping hot tea early in the day makes our morning bright and refreshing. Be it the black tea, green tea or Indian kadak masala tea, there are various types of tea that one can choose from, and the best part is that each type of tea comes with plentiful benefits. Tea is a perfect balance of tasty and healthy besides being one of the easiest beverages to make at home.

While green tea is loaded with antioxidants, polyphenols and flavonoids that help in boosting immunity, black tea with its distinct strong flavour is rich in caffeine and theophylline that can keep you up and energised. Black tea also has polyphenols, which help protect our cells and DNA against any damage. And then there is India's favourite kadak masala chai that top it all. The mention of masala chai is enough to soothe millions of chai-lovers amidst a hectic day or the morning rush.

The origins of masala chai are not completely known but tea, as we know today, was made popular in India during the British era. The British used Indian lands to cultivate tea and trade it across the world. Over the decades, we've given a whole new makeover to this soothing beverage by adding our own spices and making a whole new concoction. And while these spices make for a delicious masala chai, you can end up reaping on the many benefits as well.

Masala Chai Recipe: Masala chai is a concoction of many spices that has multiple benefits. Photo Credit: iStock.

1. Improves Digestion: Just like many warm concoctions, masala chai is excellent to regulate digestive system and keeping the gut healthy. The strong spices such as ginger and black pepper are largely responsible for this as they help produce digestive enzymes that work as catalysts to speed up digestive processes and break down fats and proteins.

2. Relieves Aches and Pains: Cloves and ginger in masala chai are said to have anti-inflammatory properties, which help in relieving severe pains by increased circulation that delivers oxygen-rich blood cells to areas with aches and ease the symptoms.

How To Make Masala Chai

Even though masala chai is an intrinsic part of an Indian household, you'll find multiple recipes of the masala chai in Indian households. In earlier times, it was a robust blend of spices and herbs such as cinnamon, ginger, star anise, cloves and cardamom with tea and the addition of milk is said to have happened much later for flavour. It emits an unmatched aroma that awakens the senses with its delicious blend of herbs and spices that lends a unique flavour.

Whichever recipe you might follow, you might still agree on the fact that there's no perfect way to prepare masala chai. You might like it mellow while others like it kadak or strong, with our without milk, or with different mix of spices. Here we have an interesting masala chai recipe that is packed with the classic spices such as cardamom, star anise and cloves along with tea leaves that you can choose as per your choice. Find the recipe here.

Prepare a piping hot cup of refreshing kadak masala chai at home and sip away the morning blues.