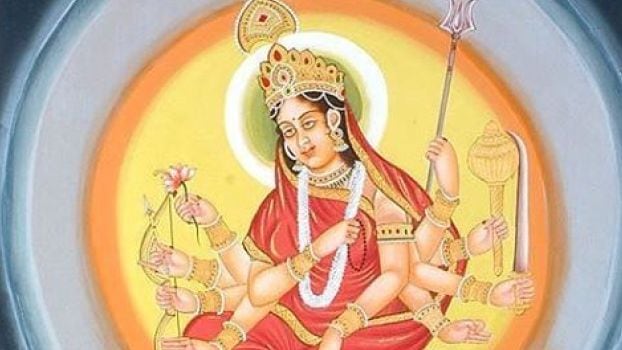 The nine day long festival Navratra is back and Hindus around the world have decked up to welcome Goddess Durga as she descends upon the earth to bless her beloved devotees. There are four navratras in an year but only two of them Chaitra Navratri and Sharad Navratra are celebrated widely across the country, the other two are gupt(secret) and observed only by sadhaks. Chaitra Navratri is celebrated in the Chaitra month of the Hindu calendar. In these nine days of festivities nine forms of Durga(Nav Durga) are worshipped and please by special offerings by their devotees.These nine forms are The nine forms of Durga are Shailputri, Brahmacharini, Chandraghanta, Kushmanda, Skandmata, Katyayani, Kaalratri, Mahagauri and Siddhidatri.

The third manifestation of Durga is Goddess Chandraghanta or Chandra-khanda. As per the legends she is depicted as a fierce 10-armed Goddess, roaring in anger. Worshiped on the third day of Navratri, Goddess Chandraghanta is ferocious deity riding a tiger, holding various weapons and swords in her 10 arms. She has a golden complexion and on her forehead she wears a crescent moon, which is why she is called Chandraghanta by her devotees.

Milk simmered with lotus seeds with nuts and a tinge of cardamom.

This preparation is made of parsai, a rice-like ingredient, that can be consumed during the Navratri fasts.

Your favourite multipurpose Navratri ingredient Sabudana can pan out in a delicious kheer preparation as an offering to Maa Chandraghanta. Flavoured with cardamom and saffron, this is one quick and easy Navratri dessert you should not miss out on.

(Also read:Beyond Cereals: Sabudana, the Healthy Carb and How to Cook it)

Listen to the latest songs, only on JioSaavn.com
4. Badaam Kheer
Recipe by Niru Gupta

This thick and creamy dessert loaded with grounded almonds and flavoured with cardamom and saffron makes for a great Navratri treat.

CommentsGive a fruity and nutty twist to your traditional kheer with this traditional South Indian specialty loaded with chunky pineapples and crunchy cashew nuts.