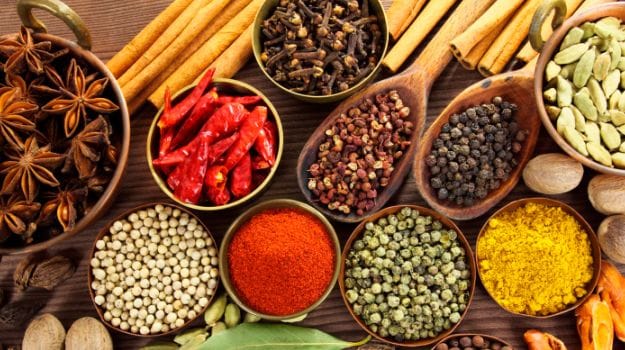 Alexander’s invasion of India in 327 BC may have been brief but it left behind a rich legacy nevertheless — in terms of mixed genes, a new school of art and sculpture, and, of course, food.

Anyone who talks of cultural purity should look no further than his or her own kitchen to discover that that concept simply does not exist. The world was a global village much before we began to call it as such and there is very little, by way of ingredients and cooking practices, that is truly “indigenous” or “native” to any place, especially if that place happens to be as multi-cultural and multi-layered historically as India.

Coriander may be one of the most common spices in the Indian kitchen; the fresh green leaves garnishing every curry imaginable and the dry seeds powdered to give you that troika of dry masalas—haldi, dhaniya, mirch (turmeric, coriander and red chilli powders) — that rules our kitchens. But it is an ingredient that came to India only post Alexander’s onslaught.

I am not a big fan of dry coriander powder, at least the way in which it is used in most Indian curries – to bulk them up as much as to flavour them with the unique, complex notes of the spice. But use it sparingly, especially if you lightly toast the seeds and then roughly pound them, it assumes a much more potent significance in your cooking, instantly elevating any dish.

In summer, a great way to use the spice — known to have anti-oxidant properties, to cure stomach aches, lower LDL and provide both dietary fibre and a host of minerals — is to use it with onions, another summer ingredient that is used traditionally to keep heat strokes at bay. Raw whole onions with our flatbread would be the quintessential mid-day meal for farmers, especially in regions such as Rajasthan, where this would protect them from the hot loo winds.

It is interesting then that a lightly sautéed whole onion recipe from Rajasthan uses freshly pounded, dried coriander seeds in the spice mix to give it a distinctive summer taste. But the recipe has a third subtle but equally prominent ingredient too: fenugreek seeds.

An easy recipe for Methi Mass

A Sprinkling of Fenugreek

Like its cousin coriander, with which it shares so many similarities, fenugreek came to India from Greece as well. Historical records suggest that it was indeed the Macedonian army that brought the spice with it to Punjab and northern India. In Latin, the name means “Greek hay”, even though, today in modern Greece, you will not find anything by that name.

Instead, ask for tsemeni (it is the Turkish name for fenugreek) and what you will get is our own methi-dana, a spice used in that part of the world to flavour pastrami and make dips and hot sauces that go exceedingly well with falafel et al.

6 Spices That'll Keep You Cool on a Hot Day

Like coriander, fenugreek is a strong spice. And like the former, the leaves are equally well-known for their culinary use. But if methi leaves are a winter staple in the subcontinent, methi-dana, the seeds, have cooling properties according to Ayurveda. They help cure fever, headaches, indigestion and aid in lose weight: just soak methi-dana in water overnight and then strain the liquid and drink it first thing in the morning to counter obesity and diabetes, the twin silent epidemics in urban India.

There are, of course, better ways to consume this spice, one of my favourites in the kitchen. The slight bitterness adds to the complexity of any preparation to which it is added: be it sautéed whole onions or a basic potato curry. Bedmi Aloo, the traditional breakfast dish from Old Delhi, has a mandatory ingredient that many replicators of the dish fail to add: methi-dana. Not only is a tangy methi-dana chutney a necessary accompaniment to the breakfast combo, but fenugreek seeds go into the humble potato curry, giving it a twinge of bitterness as well as astringency that also come with using soaked methi-dana. It is a distinctive and complex flavour profile that elevates an otherwise ordinary dish.

What Should You do With All Your Old Spices?

You could splutter a little methi-dana in oil and use it to flavour anything from rice to vegetables like okra and even fish (cooked in mustard oil). Or you can add another layer of flavour to fresh chutneys — that can balance sweet, sour and bitter, with the addition of this ingredient. Try doing this with raw mango or tomatoes, adding the mandatory sweet by way of jaggery or sugar and tempering with fenugreek-seeds, for the dash of the sublime.

And then there is fennel, the third of my favourite summer spices. Like coriander and fenugreek, it quite obviously has Mediterranean/Middle-Eastern connections too, and is similar to anise in its flavour and use. Again, like coriander and fenugreek, the leaves of the plant (belonging to the celery family) are equally and significantly used in cooking. It is also a common ingredient in Ayurveda-based Indian kitchen because of its therapeutic properties, and is commonly used as a digestive (it is an ingredient in many common anta-acid syrups as well), as a cure for coughs and respiratory infections, and as a lactation-enhancer, just like coriander and fenugreek.

Fennel is also an intrinsic part of both Kashmiri and Bengali cooking — so firmly entrenched in the traditional repertoires that you can scarcely believe that the spice made its way on to our plates from the Mediterranean, after all. But even if you are not using the panch-phoran, you could use it to flavour broths, to spice up vegetables with its distinct and powerful presence, to flavour milky drinks (fennel and cold milk go hand-in-hand; the traditional thandai is an example) and above all to make condiments for your table.

Promoted
Listen to the latest songs, only on JioSaavn.com
Speak of pickles and you cannot help but think of fennel — from raw mango achars of the Indo-Gangetic plain to red chilli pickles from Benares and Punjab, fennel is an interesting, inevitable spice, offsetting the piquancy or the hotness of the other ingredients. Besides which, of course, you can simply chew on a spoonful with a few bits of sugar for instant mouth-freshness!