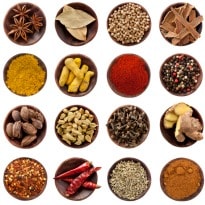 When you talk of Indian food, there are some flavors, some spices and seasonings that belong to our plate, our culture, our history.They are what define the identity of Indian food. Here's a look at the spices and herbs that would top the charts.

Saffron
The world's most costliest spice, saffron is known for its aromatic qualities and golden yellow hue. It grows in Kashmir and is harvested only a few weeks in a year, during October and November. About 70 to 80,000 flowers yield about one pound of saffron, and each stigma has to be hand picked, so it is the world's most costliest spice. It's widely used in Indian Mughalai food and in desserts.

Cardamom
The large Bengal cardamom, the paler Mysore cardamom, and the larger cardamom you get in Kerala. From curd rice, to curries, from Kashmiri Kahwa to beetle leaves, cardamom is integral to Indian cuisine.

Cinnamon
It's one of the oldest spices known to man and is a dried bark of an evergreen tree, grown in the Western ghats in India. It's a major ingredient in Garam Masala and has a delicate fragrance. It's used to flavour curries, in masala tea, in vegetables and in Indian desserts.

Asafoetida
This isn't the kind of spice that's inviting or aromatic. However, when you add it to hot oil or butter, it loses a bit of its potent smell. In fact, you could say that it is a bit of an acquired taste. Also known as the devil's dung, stinking gum or Hing in hindi, it is used very often used as a substitute for garlic and onions in Indian cuisine. It's known to be a good digestive.

Curry leaves
Widely used in South Indian cooking as an important seasoning, curry leaves can be used as a chutney or as a seasoning with mustard seeds and red chilies.You can add them to your glass of buttermilk or to your chicken stew for added flavour. Curry leaves have many medicinal properties,

Turmeric
This plant belongs to the ginger family. In ancient times, turmeric was used as a dye for cloth, especially to colour the yellow robes of the Buddhist monks. In South East Asia, turmeric is part of rituals and customs.In India, it's considered good for a glowing skin.

Black Pepper
Pepper comes from the berries of a climbing evergreen vine which is indigenous to the Malabar coast of South India. Pepper has always been viewed as a valuable commodity
and in ancient Greece and Rome, ships loaded with silver and gold were sent to India's coast and they returned with pepper. It was used for its medicinal value as well as to boost bland vegetarian or fish dishes that were consumed after keeping a fast in the Christian calendar.

Cocum
Grown in western India, it has a deep purplish flesh surrounding a large seed. It is used in Syrian Christian cooking. It's first soaked in water and then added to curry dishes. It's also added in drinks as it acts as a coolant.

Promoted
Listen to the latest songs, only on JioSaavn.com
Mint
Mint is one of the easiest herbs to grow throughout the year in Northwest India, and is used widely in chutneys, soups, salads, sauces, juices and most crucially, as a garnish for Indian food.

Red Chilli
Red Chilli is widely used in some of the most traditional and fiery Indian delicacies. The condiment is known to add a red hot colour and spicy addition to the meals. Kashmiri, Awadhi and Rajasthani cuisine are laced with an addition of red chilli. There are variants that can be found like kashmiri laal mirch, etc. Laal Mirch tadka is a popular ending note to most of the dal preparations.

CommentsTRIVIA
Spices take different times to release their flavour. Most purists would scoff at this, but that's the reason for using pre-bottled or ready-made spices. You don't end up with any raw or burnt flavours.

12 Cloud Kitchens In Delhi NCR You Must Try
Unlock: 10 Of The Best Home Delivery Options In Bengaluru