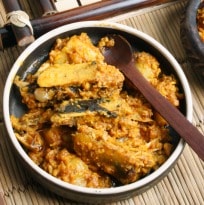 Northeastern cuisine is rich and varied enough to fill your stomach and give you much food for thought. Be it zesty pork chops from Nagaland or a subtle voksa rep chhum (smoked pork with mustard leaves) from Mizoram combined with some fragrant wild red rice from Manipur.

According to Muan Tonsing, the owner of the Delhi-based 'Rosang Café', northeastern cuisine cannot be classified in a single category.

"Most people perceive northeastern food to be momos or noodles. My aim is to change that perception. Another misconception is that our food is very spicy. Again, that varies from dish to dish and taste to taste," Tonsing said.

While Manipur is known for its fish delicacies, Nagaland is better known for its bamboo and meat fare. Mizoram mainly has boiled and subtle preparations rather than the fried foods. Sikkim and Arunachal Pradesh are more strongly influenced by our eastern neighbours like China. This influence can easily be seen in their version of momos and noodles, but again without much influx of spices. Tripura's cuisine is evidently influenced by the mainland and is known for its bursting masalas. Assamese food can vary but again is well known for its tangy flavours brought in by the extensive use of tomatoes and various citrus fruits.

Momos
Another stereotype one hears of the northeast is that it is difficult to get good vegetarian food. In reality, vegetables grown in the region are not only diverse but extremely tasty.

"We get some of our vegetables all the way from there, as they are mainly organic with no pesticides added. It adds to the cost of production but when it comes to the taste, nothing beats the authentic flavour of the northeast," Tonsing asserted.

Northeast India is home to some of the most exclusive and special spices in the world including the world renowned raja mirchi or bhut jolokia (Ghost Pepper). Bhut Jolokia is the hottest chilli in the world according to the Guinness World records. Nagaland takes pride in growing it ever since it was first brought from the states.

Aksa Kangam: Shredded chicken fry served with Raja Mircha powder
'Rosang', came into existence about a decade ago in the capital city. It enjoys its reputation as one of the oldest northeastern food serving restaurants in Delhi. Since then, Delhi has seen multiple eateries rising up, highlighting an ever-growing demand for this cuisine.

According to Ashish Chopra, the author of NE Belly - one of the first cookbooks on northeastern cuisine - the past few years have seen a dramatic change. "I have met people who have wrongly assumed that the food is unhealthy or smelly. Lots of effort is being made to change that mindset and bring this cuisine to the mainstream."

A million thanks to the migration of people from the northeast, the cuisine thus got introduced to the Delhi culinary circuit. Gradually the trend picked up and eventually from a single shop in Dilli Haat or liaison-cum-state guesthouses, there was a spurt in the number of restaurants serving this cuisine. At one point in the recent past, one could not imagine a full-fledged Naga restaurant, now that has changed. Not only have people in Delhi become more adventurous, but the cuisine itself is undergoing a metamorphosis to suit modern tastes.

Masor Tenga: One of the signature fish preparations of Assam
'The Raja Burger' from the 'Dzukou Tribal Kitchen' is one such fusion foods which blends in Naga elements but is prepared in a style that would give any American burger a run for its money. According to the owner and head chef Karen Yepthom, within the three years since she got into the food business, she has seen an amazing increase in the customer base, thus showing a growing demand for this cuisine.

"It is true that Naga food is known to be spicy, but our whole point is to try and maintain the authenticity while at the same time catering to different palates. So if a customer wants it hot, so be it and if not, then that is how we will cook it. And this is why it works for everyone," Yepthom said.

As for the stereotypes, one doing the rounds is that there is nothing that the Nagas don't eat - dogs included.

"That is a common assumption, but it is not true. It is not like everything that moves finds it's way into our cooking pots! Yes, there are particular tribes that eat dogs and other creatures like frogs but that is very rare and even that is slowly disappearing. I believe that people outside the northeast still need some awareness. Lot more needs to be done to highlight the variety of cuisine that is available," said Lisapila, PRO Tourism, Nagaland House.

Iromba, Manipuri Chutney
Like 'Nagaland House', the state guest houses of other northeast states also have restaurants serving their home delicacies at affordable prices. However, a couple of things that might keep you away from visiting any of these places can be a lack of variety on their menus and the waiting period for customers looking for a quick meal.

"We have seen people come here from all over the country and the world. They are curious to know more about our food and our culture. And if they can't go all the way to the northeast to find out about it, this is a good alternative. I have come to understand that there is much that one can learn about a culture through its food," said Billy, Meghalaya House.

So, for those who thought of staying away from northeastern cuisine due to its high use of spices or lack of vegetarian options or any other preconceived notions, be assured to receive ample of choices for whatever your taste buds are chasing after.

Promoted
Listen to the latest songs, only on JioSaavn.com
And if you are extremely lucky, who knows, you can even get to taste something which is not easily available in restaurants - rice beer. You might not find it on the menu but it is easily found all over northeast. Although it might taste like an odd variation of lassi or butter milk, but for the more adventurous ones amongst us, it can really seal the deal.