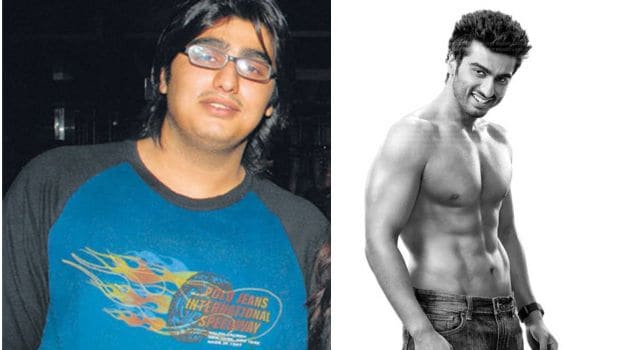 With a smashing debut in Ishaqzade, Arjun’s rustic charm made him a household name. The actor was last seen in Mubarakan, a romantic comedy directed by Anees Bazme. He played a double role (Karan and Charan) alongside Anil Kapoor, Ileana D'Cruz and Athiya Shetty. But did you know before setting the screen ablaze with his debut outing in Ishaqzaade, Arjun weighed a whopping 140 kilos, and wasn’t even eyeing a career as an actor in the Hindi Film Industry?

Yes, you heard us. Arjun who went to the same acting school as Varun Dhawan, weighed about 140 Kilos, and was inclined towards direction. He pursued this interest by assisting well-known directors and taking on the role of an A.D  in films like Salaam-e Ishq and Kal Ho Na Ho. He wasn’t just obese, he was also asthmatic, sluggish, grumpy, and could not run continuously for more than 10 seconds. In fact his plump form also earned him a nickname in the industry- ‘FUBU’

Recently, Arjun shared the anecdote behind this nickname on an episode of Karan Johar's popular chat show - Koffee with Karan. He said that at that time he was so overweight that only a particular brand’s clothes, who made oversized jerseys and sweatshirts fitted him. Thus he was given the nickname, as he would only don the clothes of that brand. He also revealed on the same show, how in those days he would look down and see a paunch staring back to him, and therefore the idea of being an actor was far from taking root. However, things changed when megastar Salman entered Arjun’s life as a beacon of hope and inspiration on the sets of Salaam-e-Ishq. The actor recognized Arjun’s talent and advised him to lose weight. Meanwhile, Arjun was still not convinced of any transformation or change, but Salman was super confident of his skill and the heights he could reach if guided on the correct path. They trained together, Salman observed Arjun’s diet and kept him from eating high-fat foods. He also used to cycle with him every morning. And made sure he was under the guidance of the best trainer and personally looked into workout.

Arjun’s dedication, perseverance, and hard work made him lose 53 kilos in two years, he not only managed to cut down on the excess calorie intake, but toned-up and sculpted enough muscles. He gave himself four years to train enough to come in front of the camera. Arjun has been a face of many health magazines ever since.

Even now when Arjun is a little low, he goes back to the times when he hung on to his will to shed the excess pounds, and gets back to feeling kicked. The journey of weight loss and the idea of never giving up has made him a better human being and a better actor. Arjun never considered surgery, because he had a lot of time on his hands and started enjoying going to the gym, hence the thought never really crossed his mind.

Arjun also has an advice for the younger lot who jump on to the bandwagon of losing weight without really knowing the way about it. He warns against going to the gym when there is no trainer or an expert around, else you can end up hurting yourself.  However, injuries are a part and parcel of workouts, and that sometimes an old injury can also come in the way of your fitness trail. When Arjun was 21, he fell off a cycle, and hurt his shoulder. At the time he didn’t even realise how serious it was until he started lifting bench(heavy weight exercise), even now the rotator cup of his shoulder gives him a problem sometimes. The key is to be careful and never give up.

Listen to the latest songs, only on JioSaavn.com
His Diet
Arjun was brought up in a typical Punjabi foodie household, who loved his mutton, chicken and naans. There was time Arjun could down six burgers at once. But once he decided to lose the weight, he diligently followed the diet chart prepared by his nutritionist. He kept away from binge-eating and junk food, ate only when he was hungry. He also steered clear from the high carb and sugary foods, substituting them with some healthier options such as fresh fruits and vegetables.
Arjun started by making small changes. He switched from white bread to whole wheat brown breads, whole egg to only egg whites and started consuming roti over rice. He also cut down on his sweet tooth craving and high sugar foods and replaced them with whole fruits. For his breakfast he ate brown bread toast, about four to six egg whites, and one egg yolk. For lunch, he had bajra roti or chappatis made of wheat flour, dal, vegetables and chicken. His protein-infused dinner contained fish or chicken with rice. He also included protein shake in his regular regime. And fresh fruits took the place of evening snacks.

CommentsArjun believes his transformation was a combination of a healthy diet and intensive training that included weights, strength and endurance training as well as cardio. His motive was to gain muscles and cut down on the fat. He did cardio each day for about an hour, followed by weight training and  circuit training. Arjun also did the CrossFit routine for 20 minutes. Umpteen Pull-ups, bench presses, dead lifts, squats later Arjun made his transformation from the chubby youth to the toned man he is today.

One must credit Arjun for not stopping at that. Even post Ishaqzade Arjun didn’t cut back in his attempt towards a healthy and fit lifestyle. For Gunday, the actor trained  himself under Harry Ranson who made the actor work-out at least five to six times a week for 60-90 minutes each day. After Gunday, Arjun worked with fitness trainer Kyle Arthur who introduced him to a mode of strength training called RAW28. This helped him get into in an even ripped and chiseled frame. For his film Tevar, Arjun underwent training to suit the character of a Kabaddi player which he was portraying in the film.

Despite undertaking the mammoth task, and attaining that perfectly ripped physique Arjun is still paranoid of gaining weight. His biggest anxiety is that he might go back to being the plump boy he had been in his teenage. Arjun finds himself in a strange predicament, he is broad and big-structured, and feels even if he gains two kilos, it would seem as if he has gained 10 kilos and losing two kilos can also look like shedding 10 kilos. But Arjun doesn’t believe in giving into anxieties, and makes it a point to work hard and compensate.  If he eats a meal outside, the next day morning he will be on the treadmill to make sure that he burns those calories. So much for discipline and dedication, continue to inspire us Arjun Kapoor.