Happy Birthday Shilpa Shetty: The 43-year-old actor made it to the list of '30 Top Health and Fitness Influencers in India' alongside India's national cricket team captain Virat Kohli and Prime Minister Narendra Modi this year! 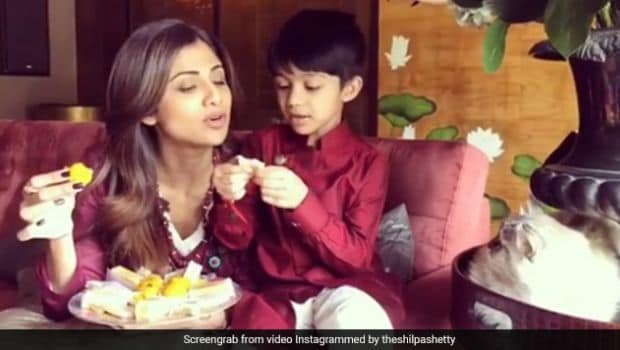 Highlights
Bollywood's ultimate binge queen Shilpa Shetty is celebrating her 43rd birthday today. This year has been quite good for the fitness influencer and foodie, as she published her second cookbook and also featured in a list of '30 Top Health and Fitness Influencers in India' alongside India's national cricket team captain Virat Kohli and Prime Minister Narendra Modi. The diva has a huge fan following on Instagram, Facebook and Twitter, and regularly posts fitness videos and motivational quotes on her social media pages. Shilpa Shetty Kundra is a huge advocate of eating clean and throwing processed foods out, as well as indulging the glutton in you to the fullest.

Shilpa Shetty has struck that rare balance between the foodie and the fitness enthusiast in her and she is a constant source of inspiration for her fans and followers. On her 43rd birthday, we have curated a list of Shilpa Shetty Kundra's best food and fitness moments from 2018:

Also Read: We Spoke to Shilpa Shetty Kundra & Here Are 8 Secrets She Wants You To Know

Who can resist a plateful of juicy, spongy, rich rasogullas? Shilpa Shetty made it into a contest along with her niece and her son to see who could eat the most number of rasogullas, and she obviously won. You have never been more relatable, Shilpa!

Shilpa has been known to celebrate almost every festival with equal fervour and we loved the way she celebrated Gudi Padwa, with a batch of healthy, homemade chikkis. For anyone wanting to merge nutrition with taste, these chikkis were a thali-full of inspiration!

Here's another occasion that Shilpa Shetty celebrated with food. The diva got her son along with her this time to binge on some good old, motichoor ladoo and kaju katli and that irresistible South Indian delight Mysore pak.

Easter celebrations have got to be overloaded with yumminess and that's what Shilpa Shetty ensured, by bingeing on excessive amounts of chocolate eggs. We just couldn't stop dreaming about that huge Easter egg for days afterwards!

Coming to Shilpa's fitness routine, it's a very well-known fact that the diva loves practicing yoga. Her Instagram page is full of videos where she successfully stretches her body into impossibly difficult asanas or poses. Here's one of her perfectly nailing the 'Shirshasana' or the headstand pose, without any support:

It seems like Shilpa Shetty's workouts are also inspired by yoga asanas. Here's a video of Shilpa doing a "Sarvangasana and Dandasana inspired" core workout:

Here's one where Shilpa showed us all how she preps for her sinful Sunday binges- by already burning double the calories that she consumes! Those well-versed with nuances of yoga practice will appreciate how difficult it is attempt a 'bakasana'. Shilpa takes the challenge one step further by doing the pose on an imbalanced bosu ball!

Recently, Union Minister for Information and Broadcasting, Rajyavardhan Singh Rathore, started a fitness challenge that many Bollywood celebs became a part of. Shilpa Shetty also joined the challenge and shot a video of the incredible 'suryanamaskar', which makes you burn a lot of calories in a single rep.

Shilpa Shetty Kundra has given all of us major fitness and foodie goals for years now, by showing us that keeping fit doesn't necessarily have to involve giving up on all our favourite food. We wish the diva keeps inspiring us to clean up our plates and enjoying life, foodie style.