How to bake doughnuts | Ruby Tandoh 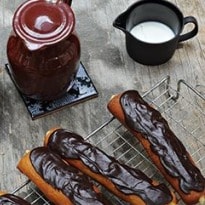 Doughnuts have always come in all shapes and sizes: holes are optional. Try these two treats: the Boston cream 'donut' is based on a modern American classic, while the other prized by ancient Olympian athletes

Think outside the Krispy Kreme box. Doughnuts might be yeasted, or leavened with baking powder, or even made with featherweight choux pastry. Some are dredged with sugar, others glazed or flooded with sticky syrup. Then there's the shaping: fat jam doughnuts, rings, long fingers, fritters, square beignets or tiny puffs, such as the loukoumades below. There's only one point I won't budge on, and that's the cooking: a doughnut must be fried.

Thick vanilla custard and a chocolate glaze: these are the foundations of the Boston Cream pie. But here they appear in a slightly different guise, piped into and spooned on to deep-fried doughnut fingers.

1 Combine the flour, yeast, salt and sugar in a large bowl. Add the milk, egg and softened butter, then use your hands to mix it together into a sticky dough. Knead for 10 minutes, or until the mixture is smoother and more elastic. It should grow less sticky as it's kneaded. Place in a large, covered container to rise until it has doubled in size - which takes about 1 hour.

2 While the dough rises, prepare the custard filling. Heat the milk over a low heat until scalding. While it warms, whisk the yolks with the sugar in a large bowl until pale and creamy, then beat in the cornflour. Pour the scalding milk slowly into this egg yolk mixture, whisking constantly. Tip the lot back into the pan and heat gently, stirring all the time, until the first bubble breaks through the surface. Now cook for 1 minute, stirring, remove from the heat, decant into a clean bowl and cover the surface of the custard with clingfilm. It should be very thick and smooth.

3 On a lightly floured surface, roll the risen dough to a 15x30cm rectangle. Leave to rest and shrink slightly, then re-roll back to the proper size. Cut into six 15cm-long strips. Leave them to rise on a piece of lightly greased baking parchment for 45-60 minutes - until the dough is 1½- 2 times as thick.

4 Towards the end of this rising period, start heating the oil in a deep pan (preferably not nonstick). The correct temperature for frying is 180C/350F. I'd recommend a sugar thermometer for this (they're cheap and take the guesswork out of deep-frying) but if a 2cm cube of bread browns all over in 60 seconds, the oil is the ready.

5 Carefully lift the risen doughnut fingers into the oil, frying in batches of two or three at a time. Fry for 90 seconds on each side. They should puff and brown all over. Remember to test the oil temperature between batches.

6 Pat dry the doughnuts with some kitchen towel, then leave to cool completely. While they cool, prepare the glaze: sift together the cocoa powder and icing sugar, then gradually add just enough water to give a thick, but not gloopy, icing.

7 To fill and glaze the doughnuts: use a small, sharp knife to make a hole right through the length of the doughnut. (You might have to pierce halfway from one end, and then the rest of the way from the other.) Twist the knife to form a cavity to accommodate the custard. Pipe the custard into the doughnut using a piping bag with a wide nozzle. If you don't have piping bags, just slit the bun open along its length and fill it that way. Spoon over the glaze, then leave to set on a wire rack.

The apocryphal tales goes that these honey-drenched dough balls were once served to the victors at the ancient Olympic Games. This version needn't come with a side of discus any more, but you could serve them with thick yoghurt or vanilla ice cream if you like.

1 Combine the flour, yeast, salt and sugar in a large bowl. Pour in the milk and break in the egg. Add the zest and beat the mixture vigorously for around 5 minutes - tiring but important. As you continue to mix, you'll notice the batter will grow thicker and stringier - the dough is becoming more elastic, so they puff up as they hit the oil.

2 Set aside in the bowl, loosely covered with clingfilm, for 1 hour, until roughly doubled in size. Just before then, heat the oil to 180C/350F, following the guidelines in the recipe above.

3 Once the dough has risen and the oil is hot enough, use two lightly oiled tablespoons to scoop a few small balls of the batter into the hot oil. Try to neaten the shape of the ball with the spoons, but it really needn't be perfect. Fry for 60 seconds, then flip the balls over and fry for another minute, until golden brown all over. Remove from the oil using a slotted spoon and leave to cool on kitchen towel, to absorb any excess oil. Repeat in batches until all of the batter has been used.

4 When the doughnuts are ready, prepare the syrup: heat the honey, water and cinnamon in a small pan. Simmer for 2 minutes then stir in the orange zest, orange blossom water and vanilla extract. Leave to cool for a few minutes to thicken slightly, then pour on top of the doughnuts on a large plate. Sprinkle with the chopped walnuts. Eat straight away.

Photo: The Boston cream-filled doughnuts are made here as fingers alongside their traditional loukoumades brethren. Photograph: Jill Mead for the Guardian