How to Spice Up Your Life (and Baking) | Ruby Tandoh 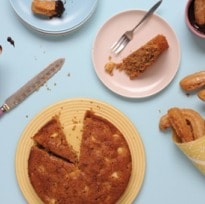 Spices come to the rescue whenever your baking is looking a little tired. Try experimenting with these punchy blends of whole and ground aromatics - a surefire way of bringing oomph and verve to your sweets.

Sugar and spice make all things nice: a pinch of pepper can lift a batch of biscuits to fresh heights; lace a cake with nutmeg and cloves to usher in the festive season. The key lies in the balance - countering the sharp notes of cinnamon with a mellow hint of vanilla, for example, or pairing fiery chilli with the sweetness of herbal aniseed. In the recipes below I've used two of my favourite blends, but feel free to deviate as much as you like, depending on your requirements, tastes and - indeed - the state of your spice rack.

This uses a mix of fennel, cinnamon and chilli where the elements are left whole, rather than ground - this kind of mix is perfect for infusing liquids. Using a similar process you can make a spiced chocolate tart, tea loaf or ganache, or even a spiced ice-cream.

1 First, prepare the dipping sauce. Gently heat the cream, milk, fennel seeds, cinnamon stick, chilli flakes and salt until just simmering, then set aside for 15 minutes. Strain the spices from the mixture and set the cream back over the heat until it's scalding. Add the chocolate to a bowl and pour the hot cream over it. Add the sugar and stir until smooth and glossy. The sauce can sit at room temperature while you prepare the churros, but it's best to reheat it a little - over a water bath or in the microwave - just prior to serving.

2 Stir together the flour, baking powder, sugar, cinnamon and salt in a large bowl. Add the boiling water, vegetable oil and vanilla extract then stir vigorously to combine, beating the batter until it's smooth. It should be thick and sticky - not quite loose enough to be pourable, but not so firm that it could be kneaded. Leave it to rest for 10-15 minutes.

3 While the batter rests, pour the frying oil into a large pan (preferably not nonstick) to a depth of 8-10cm. If you have a sugar thermometer, clip it on to the side of the pan now. Set the pan over a medium heat until the oil reaches 170-180C/338-356F. This won't be quite as easy to gauge if you don't have a sugar thermometer, but a good rule of thumb is that if a 1cm cube of bread browns all over in roughly 60 seconds, the oil is ready.

4 Spoon the rested batter into a large piping bag fitted with a wide star nozzle (if you don't have any nozzles, just cut a 1.5cm diameter tip for the piping bag instead. Holding the tip of the bag reasonably close to the oil to prevent the oil from splashing, squeeze out a 6-8cm "sausage" of the batter, then use a pair of scissors to snip it off at its join with the piping bag. Squeeze 3-4 more portions of batter into the oil in this way, then leave them to fry for 1½-2 minutes, turning halfway through. They're ready when they have turned a rich golden brown, are well‑puffed and crisp.

5 Use a slotted spoon to fish the churros from the bubbling oil and pat them dry on a few sheets of kitchen towel. Sift the icing sugar and cinnamon together and toss the still‑warm churros in the mixture. Serve warm with the dipping sauce straight away.

2 Combine all the ingredients for the spice mix and set to one side.

3 Cream the butter and sugar together for a couple of minutes, until lighter and smoother. Stir in the eggs and milk - don't worry if the mix is a bit lumpy at this point. Stir in the chopped apple through the butter mixture. In a separate bowl, combine the flours, baking powder, spice mix and salt.

4 Add 2 tbsp of flour mixture to the wet ingredients and beat well until smooth. Fold in the remaining dry ingredients. The batter will be reasonably stiff but this is nothing to worry about - the apples will release moisture as they cook, so it's important not to add too much liquid to the mix at this point.

5 Spoon the batter into the tin, sprinkle demerara liberally over the top, if using, and bake for 40-45 minutes, or until a small knife inserted into the centre of the cake emerges clean. Leave to cool completely on a wire rack before serving.