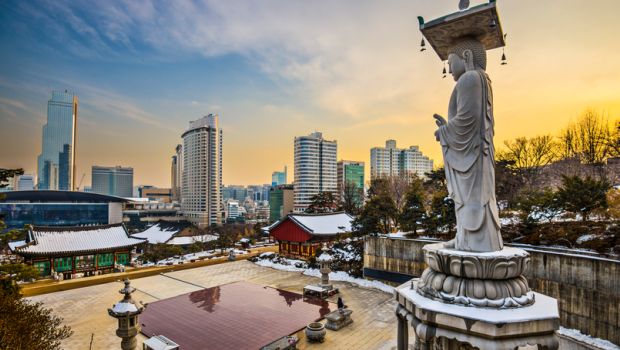 A total of 24 restaurants in the South Korean capital received Michelin stars, reflecting the city's ambitions as a fine-dining hub and the emergence of Korean cuisine from the well-established shadows cast by those of Asian neighbours China and Japan.

"I think it's widely seen as one of the hidden gems of world cuisine," said Michael Ellis, the international director of Michelin guides.

The guide cited Gaon for its "meticulously-prepared dishes" and commitment to promoting a "better understanding" of Korean food. Gaon's executive chef Kim Byoung-Jin said he was stunned and "extremely honoured" with the three-star rating, crediting his kitchen team and an insistence on the finest seasonal produce.
"All good food starts from fresh ingredients," he told AFP.

Having spent the past 13 years honing his take on traditional Korean cuisine, Kim said he hoped the ultimate stamp of approval from Michelin would help South Korean gastronomy "receive the appreciation it deserves".

"In order for Korean cuisine to be universalised, it must meet a universal standard and I think the Michelin listing will help Korean food become a more approachable cuisine for many people," he said.
Of the 21,000 restaurants featured in Michelin guides around the world, just over 100 are rated with three stars. Starred restaurants have, in the past, built big businesses after being recognised.

The other three-star recipient was La Yeon in the Hotel Shilla which was praised by Michelin for the chef's contemporary touch on traditional Korean cuisine.

Following the 2007 publication of the Tokyo guide -- Michelin's first foray into Asia -- Seoul is the latest city in the region to get its own version of the culinary bible.

There are also editions exploring Shanghai, Hong Kong and Singapore.

Among the one-star recipients was Balwoo Gongyang, a popular lunch and dining spot, which serves strictly vegetarian dishes based on Korean Buddhist "temple" cuisine.

Lucia Cho, the owner of Gaon, and another restaurant, Bicena, which was awarded one star, said it had initially been a struggle to marry Korean cuisine and fine dining -- not least because of resistance among Koreans themselves.

"When we first opened Gaon, not many people appreciated the value of Korean food and complained about our pricing," Cho said.

"But people pay 300,000 won on Japanese or Chinese course meals," she said, adding that it is the Koreans who set a low standard for Korean cuisine overseas.

"I think more people will think about what defines good food and strive to open a fine-dining Korean restaurant that will be recognised by a renowned international system like Michelin," she said.