Mysore Pak: The 3-Ingredient Dessert that Melts in the Mouth 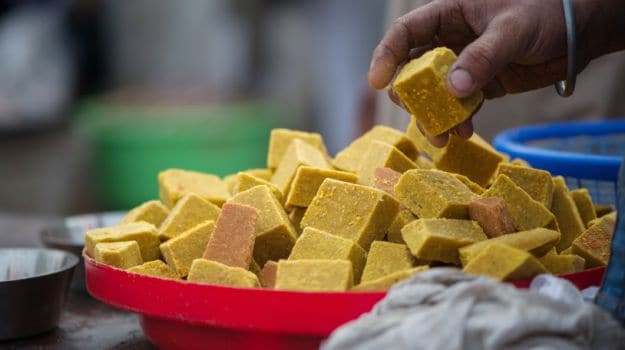 It's not unusual for passengers on flights out of Chennai to make a short stop at the airport counter of Sri Krishna Sweets. This store's 'Mysurpa' has developed a loyal legion of fans well beyond the Vindhyas. Most 'dessertarians' find the melt-in-your-mouth texture of this sweet quite irresistible but it also has its share of detractors.

Mysuru is one city you are bound to find some of these detractors. My quest for the origins of one of South India's most iconic sweets took me near Mysuru's busy flower market. Guru Sweets might resemble a zillion other nondescript sweet stalls but it's here that the legacy of Mysore Pak's inventor lives on. Kakasura Madappa used to be one of the stars in the Mysore Maharaja's kitchen about a century ago and it was probably a sudden burst of creativity that resulted in a sweet that continues to be associated with the city to this day. It's essentially three ingredients - ghee, chickpea flour and sugar that come together for this delicate sweet with a golden hue. The sweet takes its name from paka the local word for sugar syrup.

Sometimes its simple recipes with minimal ingredients that are the most difficult to execute. The Mysore Pak is a case in point. With just three essential ingredients there's no hiding place or quick fix if the cook falters. Little wonder that even the most seasoned culinary experts sometimes take a few attempts to get it right. Guru Sweets is almost eight decades old and is now in the hands of Kakasura Madappa's great grandsons. There's no major branding and the Mysore Pak merges with an array of other sweets but almost everyone in Mysuru can direct you to this shop. The staff behind the counter nod gently when quizzed if a dash of turmeric is their secret ingredient. It ensures their Mysore Pak is not overly sweet and also lends that gentle glint of gold. There are other stores like Mahalakshmi Sweets that hawk the authentic Mysore Pak but Guru Sweets' hallowed reputation is almost unrivaled.

Tales of its Origin

There's another theory that the Mysore Pak originated in Ramnagara, a small town on the Bengaluru-Mysuru road. The rocky surrounds of Ramnagara were the backdrop from one Bollywood's evergreen classics - Sholay. Janaradhana Hotel that also calls itself the 'Mysore Pak Hotel' has been a popular stop at Ramnagara since the 1920s. There's also Gundappa Hotel in Bengaluru that has been a flag bearer for the traditional Mysore Pak almost since the 1930s.

The texture of the traditional 'porous' Mysore Pak is meant to be slightly hard on the outside and yet 'crumbly' when you bite into it. A contrast from the soft and 'melty' texture that has been made popular by Shri Krishna Sweets. Another popular sweet shop in Chennai - Grand Sweets, veers towards the traditional Mysore Pak. These two styles have virtually split the Mysore Pak fans into two camps. It's not just the texture, some of Chennai's sweet shops have crafted their own versions from a Horlicks Mysore Pak to a Cashew Mysore Pak that traditionalists in Mysore might frown upon.

I've watched my grandmother from Bengaluru (and my mother after her) focus all her attention when she used to make a traditional Mysore Pak. It's literally a case of 'Gone in sixty seconds'- you let your attention waver and you could end up with a botched up version. Her traditional 1-2-3 recipe is similar to the one wedding cooks use in Chennai and Bengaluru to this day:

1. Roast the flour (without any oil) on a low flame in a wok (kadai) for about 2-3 minutes ensuring that no lumps are formed.

2. Spread the hot flour on a plate. Keep aside.

3. Add water, milk and sugar to the wok and heat on a low flame. Also add a pinch of turmeric and oil (odourless) as your stir. (The oil lends a gloss to the sweet. The softer 'Mysurpa' version uses extra milk)

4. Use a second wok (kadai) to melt the ghee on a medium flame.

5. Once the sugar syrup achieves a 'two thread consistency' start adding the chickpea (besan) flour gradually and keep stirring as you do. Also add the baking powder at this point.

6. Add a ladle of ghee to the mixture. Wait for the remaining ghee (on the second wok) to reach boiling point before you turn it off.

7. Keep adding the boiling ghee to the first wok ensuring no lumps are formed. Turn off the flame once the mixture assumes a frothy and porous consistency.

8. Brush a plate with a little ghee. Ensure this plate is at least 5 cms high (so that you get the right height for the Mysore Pak)

9. Pour the mixture on to the plate. Add a little ghee on top of the mixture and also sprinkle some sugar on top.

10. Cut the mixture in about five minutes when it's still hot for the perfect shape and texture.