Now's the Time to Savour a Stodgy Steamed Pudding 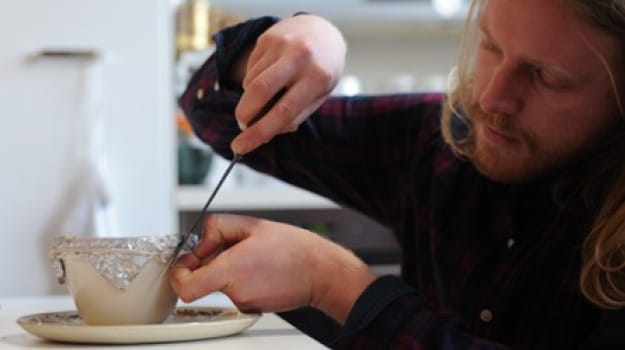 January's no time to detox! Tuck into something comforting, warm and stodgy like this easy-to-make steamed pud. You can burn off your winter layers some other time...

If you were expecting this column to start the new year with a gluten-free alfalfa sprout and spirulina smoothie, think again!

I have no truck with this strange modern tradition of turning January into a month of penitence. So you gobbled too many mince pies over Christmas? Snarfed a whole box of Lindt balls while no one was looking? Having trouble writhing back into your jeans? Good for you. This is what my wife's grandmother used to call: "putting on your winter layer".

The British used to experience the worst of winter far more keenly than we do now. One of the great generational dividing lines is between those Britons who grew up plagued by agonising chilblains (everyone over 60) and the rest of us milk-fed sops.

My grandmother-in-law had a particularly freezing childhood. Her father, a Gloucestershire tenant farmer, was a great believer in the moral and physical benefits of fresh air, so he removed all the windows from the children's nursery.

As a result, they developed chilblains on every exposed body part - noses, lips, ears - but also an instinctive understanding of how to fight the cold. They wrapped their torsos in layers of newspaper, slept in long johns, jumpers, overcoats and hats, and squeezed four-to-a-bed like polar explorers huddled in a tent.

And they ate a lot of suet. Warm, stodgy, sweet puddings designed to bring comfort to a numbed soul, and enough calories to make up for 24-hour shivering. Putting on a couple of pounds over winter was not a cause for self-hatred, but a practical measure - like a cat growing a thicker pelt.

Things are very different now, of course. Most of us live and work in centrally heated buildings, and have no need of a "winter layer". Even so, when the sun is low in the sky and the wind sharp around the ears, an ancient tribal wisdom still speaks to us: "eat stodge."

The recipe below, by my collaborator Jane Baxter, is both an antidote to January health fascism and a tribute to the survivors of winters past. The gooey marmalade sauce is like a blast of summer sunshine, while the stodgy crust is nursery food of the first order.

Having tried loads of steamed pudding recipes I always come back to this one - it is the basic recipe we used for the marmalade roll in Joyce Molyneux's The Carved Angel, in Dartmouth. You can also use jam. The whole recipe revolves around the weight of your eggs.

Serves 8 in a 1 litre pudding bowl

1 Take all your milk and butter out of the fridge beforehand so that everything is at room temperature when you start. (The same applies to eggs if you keep them in the fridge, which you really don't need to.)

2 Weigh your eggs. Make a note of the weight and then weigh out the same quantity each of sugar, butter and flour, adding them all to a decent-sized bowl.

3 Mix everything except for the milk, marmalade and brandy together with an electric hand whisk for about 3 minutes - until well combined. Add enough milk so that the mixture is of a dropping consistency - a good blob of it should just fall off a spoon when held above the mixing bowl.

4 Grease a 1-litre pudding bowl with butter and place the marmalade and brandy in the bottom of the bowl. Spoon the pudding mixture over it. If the bowl has a lid then use it to cover the bowl, or cover with tin foil and tie with a piece of string. Borrow someone else's finger to ensure the knot is good and tight.

5 If you have a steamer, place your bowl on it above a pan of boiling water and make sure it is covered well, either with a lid or with foil. If you don't have a steamer, you can rig one up: all you need is something that will hold the pudding bowl above the water in a saucepan. A metal pastry cutter works well, or even a solid tea cup (but not your best bone china). Place your pudding bowl on top and pour in boiling water before covering with a lid or some foil.

6 Keep the water at a simmer and check now and again that the water isn't boiling dry. If it is, you can add a little more boiling water from a kettle. Steam for 1 hour 30 minutes.

7 To serve, turn out the pudding on to a warm serving dish and top with lots of custard or double cream.

What else you can do

Rather than custard or cream, top the puddings with lots of lemon juice and honey, raspberry jam or simply a hearty dollop of golden syrup.

Roast two bananas in their skins for about 15 minutes at 200C/400F/gas mark 6. Allow them to cool and add to the cake mix at the point when you're adding the milk.

Make a caramel by boiling 100g brown sugar with 50g butter and 100ml milk for a few minutes. Pour this into the base of the bowl before adding the cake mix and steaming.

If you want to be dainty, it is possible to use smaller individual moulds. If you had eight of these, they would cook in half the time. You will need to do some intricate balancing in your pan.

Turn out the pudding on to a warm serving dish and top with lots of custard or double cream. Photograph: Jill Mead/Guardian