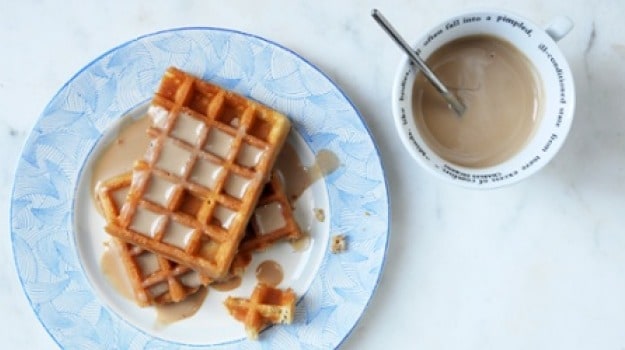 From milk jam to saffron kheer and home-made ricotta, your milky treats showcase the versatility of this cornershop staple

The addition of a few spices, spoonfuls of sugar or a pinch of salt transforms milk - the ultimate fridge staple - into something much more interesting, elegant and often even downright indulgent. The aromatic spices of DeezCulinary's kheer (Indian rice pudding) filled my house with a warming, winter fragrance, which was almost as pleasant as the pud itself.

Next came Diane Kitchen's traditional Spanish dessert, leche frita (deep-fried custard). Make it when you are feeding a crowd, because resisting the urge to scoff the lot on your own is nigh-on impossible.

Although it only requires milk and a lemon, the homemade ricotta from Worththesalt is bound to impress anyone you serve it to. I hadn't come across chicken cooked in milk before, but MizPepperpot's dish, emboldened with garlic, sage and green peppercorns, yielded truly flavoursome results and took less than 10 minutes to prepare.

However, this week's winning recipe in Angela Kim's gentle, floral, milky jam - the best use of a teabag and a half a pint of milk I can think of. Brilliant with buttery scones and Scotch pancakes, you could even drizzle a little of this over the leche frita, if you dare.

This is one of the most delicious things I have made in my kitchen. The jam is full of milky, caramel goodness with a faint hint of Earl Grey tea. Spoon it directly out of the jar, or drizzle over pancakes, waffles, or ice-cream. Bring the jam to a room temperature before serving. I adopted this recipe from my aunt's cookbook Cold Sweets, available only in Korean (unfortunately).

1 Bring the milk to a simmer in a saucepan over a gentle heat. Remove from the heat, add the teabags, steep for about 10 minutes, then remove.

2 In a large frying pan or nonstick saucepan with high sides, bring the infused milk, sugar, honey and salt to a gentle simmer. Stir until the sugar has dissolved.

3 Add the cream to the pan in three stages, stirring constantly until it has been incorporated.

4 Add the butter, stirring until melted. Simmer the sauce over a medium heat for about 20 minutes, stirring frequently to prevent the jam from sticking to the bottom.

5 Once the jam has thickened and turned slightly darker in colour, simmer for 10-15 minutes longer. It will thicken further once cooled.

6 Pour into a hot sterilised jar or airtight container then seal with the lid to prevent a skin from forming. Keep in the fridge for up to 5 days.

I teach Spanish in my local secondary school, and every year we have a languages festival. During the festival, we organise cookery sessions for our year 12 students - last year we made leche frita. Originally from the Basque country, the name is literally translated as "fried milk", although it is actually more like a thick vanilla custard, cut into triangles, dipped in egg and breadcrumbs and fried before it is finally dusted in cinnamon sugar. The trick is to leave the custard overnight to chill until really firm before frying.

Zest of half a lemon

For the breadcrumb coating

1 Put the milk, lemon zest and vanilla seeds into a pan and bring to the boil, then remove from the heat and leave to cool.

2 In a bowl, beat together the egg yolks, sugar, plain flour, cornflour and a small amount of the cooked milk into a smooth paste.

3 Return the pan of infused milk to the heat and bring to the boil again. Remove from the heat then add the milk to the egg yolk mixture, stirring all the time.

4 Transfer the egg and milk mixture to a clean pan and heat very gently, stirring until you have a thick custard.

5 Pour the custard into a 20cm-square greased baking tray, leave to cool, then place in the fridge overnight.

6 The next day, turn the custard out and cut into 5cm squares, then into triangles. Put the flour, egg and breadcrumbs in three separate bowls. Dip the triangles into the flour, then the egg, then the breadcrumbs.

7 Pour the oil into a fairly small saucepan so it's around 1/2 full, then heat until a breadcrumb crisps and sizzles in around 30 seconds. Lightly fry the triangles until crisp and golden. Remove with a slotted spoon on to kitchen paper.

8 Mix the caster sugar and cinnamon together, sprinkle over the triangles and serve straight away.

Kheer is a traditional Indian dessert made from rice, milk and sugar, and flavoured with cardamom and saffron. Garnish with dried fruit and nuts of your choice.

100g long-grain rice, such as basmati

A pinch of saffron strands

1 Cover the rice in cold water then leave to soak for 30 minutes. Drain, then set aside.

2 Pour the milk into a large saucepan, then bring to a gentle simmer. Add the rice, stir to combine, then add the saffron, ground cardamom and flaked almonds. Simmer until the rice has cooked, and the milk has reduced by half - this can take around 45 minutes to an hour. Keep stirring to make sure the rice doesn't catch the bottom of the pan.

3 Add the sugar to taste, then stir until combined. Pour into a large serving bowl or individual dishes, then top with your choice of dried fruit and chopped nuts.

I realise that "chicken cooked in milk" may sound a little weird, but variations of this dish have been done by others and it's more than worth the little effort it takes. The lemon zest reacts with the milk during cooking to create the most gorgeous, zingy sauce, and the peppercorns add a gentle heat. You'll need a lidded casserole big enough for a whole chicken.

A handful of fresh sage leaves

2 Heat the olive oil in a large, lidded casserole on the hob, then brown the chicken well on all sides.

3 Discard any excess oil, then add all the other ingredients to the pot, cover and put in the oven for 90 minutes, basting two or three times during cooking.

4 Five minutes before the time is up, remove the lid. Then, using a fork, squash the garlic cloves and a few of the peppercorns into the sauce. Cook for the remaining 5 minutes then serve with mashed potatoes and green beans.

This recipe makes a really nice creamy ricotta. It's so easy, tastes amazing and keeps in the fridge for a couple of days.

1 Bring the milk to a simmer in a large saucepan over a medium heat. When it is hot and frothy on top, pour in the lemon juice and remove the pan from the heat. The curds will start to separate from the whey immediately. Leave to stand for about 10 minutes.

2 Line a sieve with the piece of muslin and place it over a large bowl. Now carefully pour the curds and whey into the sieve. Leave it to stand for 15 minutes so the whey has nearly all strained out (you want to keep a bit of the whey in the curds or the cheese will be too dense). Add some salt to the curds if you want. Allow the cheese to cool completely before eating.