Sonam Kapoor Is Having Loads Of Foodie Fun In Tokyo! (See Pics) 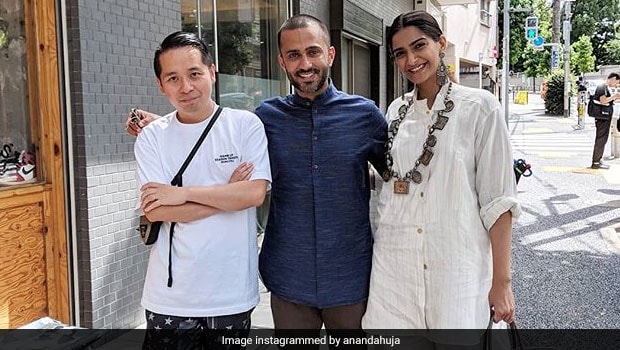 Highlights
Newlyweds Sonam Kapoor Ahuja and Anand Ahuja are currently spending a lot of their time globe-trotting and after spending a month in London, the good-looking couple has just landed in Tokyo, Japan. It looks like the two are having a gala time exploring the city and obviously their itinerary includes some food stops as well. Both Sonam and Anand have been posting loads of pictures and videos from their Japan trip on their respective social media pages, making us wish we could take a trip as well! Sonam Kapoor and Anand Ahuja are celebrating their two-month wedding anniversary as well today and Sonam marked the special date, by posting a throwback picture from her wedding to her Instagram stories.

However, what caught our attention is all the delicious-looking food that Sonam is indulging in, in Japan. A well-known foodie, Sonam Kapoor famously turned vegan a few years back and so obviously all these dishes include a lot of fresh produce as ingredients, but they look far from bland or boring. In fact, some of these dishes look as appetising as any non-vegetarian dish. Have a look!

You've got to eat your greens!

And finally, for desserts:

Looks like Sonam Kapoor is not forgoing her healthy meals, even while she is on a vacation! But doesn't everything look oh-so-good? In London, Sonam Kapoor had given a shoutout to her restaurateur bestie Samyukta Nair's Bombay Bustle. Sonam and Anand were spotted enjoying a truly desi meal of South Indian dosa, sambhar and chutney at the restaurant, which Sonam said was her "favourite place in London."

Also Read: Sonam Kapoor Just Showed Some Love To This Vegetarian Recipe And It Looks Delicious!

Work wise as well; things have been pretty great for Sonam Kapoor. The actor, who was last seen in Veere Di Wedding, will be seen next in Ek Ladki Ko Dekha To Aisa Laga. The film also stars Sonam's father and legendary Bollywood actor Anil Kapoor, the very talented Rajkummar Rao and Juhi Chawla. The teaser for the film was launched recently and fans are eagerly awaiting the release of the trailer. Well, we wish Sonam Kapoor and Anand Ahuja on their two-month anniversary and wish Sonam keeps sharing her love for food with the world!