Come monsoons and the urge to savour fried snacks is at its peak. A cup of tea, some snacks to nibble on and a beautiful spot from where you can see the rain trickle down - isn't this all that you could ask for? 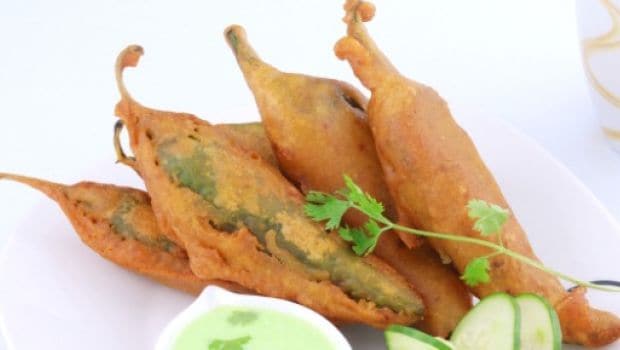 Highlights
Come monsoons and the urge to savour fried snacks is at its peak. A cup of tea, some snacks to nibble on and a beautiful spot from where you can see the rain trickle down - isn't this all that you could ask for? One of the most loved snacks which can be particularly enjoyed during the monsoon season is the Mirchi Pakoda and you would agree that it is hard to have just one. The mirchis that you make the pakodas with give a slight spicy kick to the pakodas and the delicious fillings inside balance other flavours to make it the perfect evening snack. Here are a few variations of the Mirchi ka Pakoda that you must try while the season lasts.

Rajasthani Mirchi Vada is a popular street snack in Rajasthan and is also known as Jodhpuri Mirchi Vada. Big-sized mirchis or green chilies are slit open and stuffed with a masala aloo filling that includes chili powder, coriander powder, saunf, amchoor, asafetida and other spices. It is then deep fried after dipping the chilis in abesan batter. To add to the spice and flavour you can use some garlic and ginger too. Enjoy them with green coriander chutney or chili chutney to make it spicier.

(Also Read: 6 Vegetables That Are A Must-Have During Monsoon)
Indulge in stuffed mirchi pakodas this monsoon

If you are in no mood to add any filling to your pakoda, then the plain mirchi pakoda can be your go-to snack. Chilies have a certain flavour along and you can enhance it by adding some spices to the besan batter. All you need to do is take some besan in a bowl and add carom seeds or ajwain, chili powder, garam masala, asafetida, salt, baking soda and make a thick batter. Dip the mirchis into the batter and deep fry them. Your tea-time snack will be ready in minutes.

(Also Read: 6 Reasons Why Bhutta Makes for an Amazing Snack This Monsoon!)

Plain mirchi pakodas are here to spruce up your monsoon

Thanks to paneer for being such a versatile ingredients, mirchi pakodas can be given an interesting twist with paneer and various masalas stuffed into the mirchis. The soft filling is surely going to make you want more. All you need to do for the filling is to add grated paneer, ginger-green chili paste, dried mango powder, turmeric powder and some fresh coriander. Stuff the filling into the mirchi and dip it into the besan batter and deep fry to make it crispy from the outside. Serve it with green chutney.

Who wouldn't love cheesy pakodas with a spicy twist? Mirchis full of cheese oozing out can turn out to be the perfect snack for a rainy day. Add cheese, onion, salt and coriander leaves and mix them to make the filling. You can always experiment by adding some more condiments to the filling.

Mirapakya Bajji is a Telugu word that translates to mirchi and is a famous snack in South India. It is loved in Andhra Pradesh and is generally served with coconut chutney, green coriander chutney or a nutty peanut chutney. The mirchi is stuffed with tamarind pulp, salt and spices including chaat masala, cumin seed powder or a special Andhra masala. The mirchis should be long and thick so that they can be stuffed generously to enjoy a burst of flavours.

The deadly combination of whole spices and mirchis is just exceptional and unmissable. To make the filling, add roasted besan, salt, ajwain, sesame, saunf, red chili powder, coriander seeds and cumin seeds and grind them together to make the masala. You can add some lemon juice to add tanginess to the stuffing. This spicy masaledar mix is just what you need to enjoy the rains.

If you have tried a twist to the Mirchi Pakoda, do share with us. This monsoon make sure you make most of your cravings with these delicious variations to your all-time favourite snack.