The New Mcdonald's Burger That Everyone is Talking About 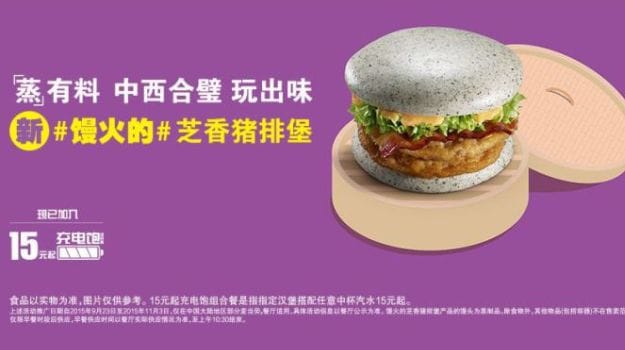 Crazy coloured burgers seem to be the new trend. After black and red burgers, the latest item to hit the menu is Mcdonald's grey burger. Named as the 'Modern China Burger', the grey burger is only available till November 3rd. The burger has been released in time for Halloween.

Contributing to the to the colored bun phenomenon, this burger comes with two slow-cooked pork patties, bacon and salad topped with spicy Sichuan pepper ketchup – all packed between burger buns that have gained attention for their distinctive grey colour speckled with black spots. These buns are made with steamed mantou, a type of bread popular in Northern China which is used to make steamed buns.

In their advertisement, the burger glimmers like a moon rock with its metallic grey buns. The look may not be appealing, but most tasters say that it’s not that bad to eat.  We’re not sure if they are planning to launch the burger in other countries, but this can be seen as a move to revive their slipping profits.

Earlier this year, Burger King Japan launched a red burger with eep-red buns, dark-red cheese, red tomatoes and a blood-red sauce made from doubanjiang spicy chili bean paste. But this isn't the first time Burger King Japan has introduced a coloured burger. They first came out with the 'black burger' which was adopted by other food outlets all over the world. A burger with black buns, black cheese and yes, black sauce. While the black buns and cheese are made using bamboo charcoal, the patties are sprinkled with black pepper and the sauce is made with garlic, onion and squid ink.

Promoted
Listen to the latest songs, only on JioSaavn.com
So is grey the new black? We can’t say. But some people are known to have reported certain side effects after consuming the oddly coloured black burger.  There has been some buzz the black burger makes you  excrete green stool! One reason could be that synthetic dyes are not broken down or absorbed in the body so they're eliminated with the stool. Certain natural and synthetic dyes are allowed to be used and are considered safe for human consumption by food authorities across the world.

Some call it pale and boring while others can’t wait to try. Here’s how Twitter titans reacted to the launch of the grey burger.

The grey burger freak out is funny. It's black sesame. Black sesame is tasty. I would eat it. So there. pic.twitter.com/lFFCu9O6JA

Hard to guess what inspired McDonalds Modern China Burger. Concrete? Pollution? The grey bun is on sale Til' Nov 3. https://t.co/wEDv9Pgmrt

Who thought grey burgers were a good idea? Go home #McDonald's, you're drunk. via @catchnewshttps://t.co/S1XF1tkMRDpic.twitter.com/qGLfmvB0gp