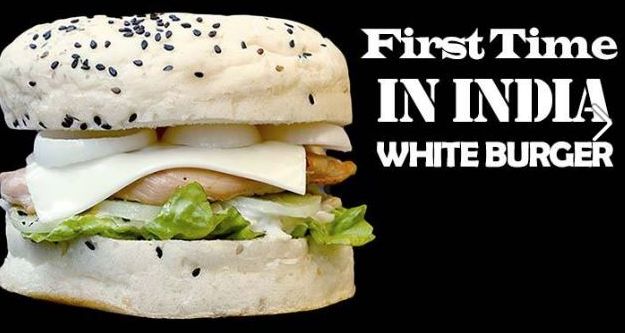 Over the past few months food enthusiasts have been flooding social networking sites with pictures of burgers in black and red colours. The newest entrant to the family of coloured burgers is now white which is launched by Barcelos, a South Africa based food chain that had previously introduced the black burger to India. The white burger has a cottage cheese patty topped with mayonnaise, green pepper, mango chilli, orange and chilli garlic and stuffed between a white bun.

"I would not call it a colour, because in the normal bun they use flour and other ingredients which turn out to be brown. We just used different ingredients which came out as different colours," says Rohit Malhotra, GM, Operation, Barcelos. While the black and red burgers were novel innovations by the Portuguese food chain, the white burger was already being sold by them in South Africa.

"White has been there with us in South Africa for a long time. We have been selling this there for the last few years. All we did here was to add more flavours," says Malhotra. The bun in the white burger gets its colour from a mix of milk powder, coconut and plain flour. The idea of bringing out a coloured burger first struck Malhotra when he chanced upon a black one himself at an eatery in Paris.

(Bizarre Burgers: Would You Dare to Bite In?)

"I saw this concept few years ago, where a restaurant in Paris was selling coloured burgers, we picked it up from there," he says. The international food chain Burger King had also introduced their black "Kuro Burger" with black cheese and black sauce in 2012 in Japan. Believed to have been "dyed" with squid ink and bamboo charcoal, they were not received with much enthusiasm.

Barcelos, however appear to have chosen ingredients which are believably edible, particularly for an Indian clientele. "Squid ink couldn't be used here for obvious reasons, and we found bamboo charcoal a little risky because it might have backfired. People might not understand that bamboo charcoal is edible. We did not want to experiment that," says Malhotra.

The black burger at Barcelos, therefore gets its colour from a combination of wholemeal flour, roasted wheat, herbs and spinach extract. The black patty, both Peri Peri Black Beauty (Veg) and Black Magic (Non-Veg), are doused in mozzarella cheese and topped with jalapeno and pickled beetroot, giving the burger a tangy flavour. Malhotra says the company undertook an extensive research and development before settling on the final ingredients for the colour.

As far as taste is concerned, the red burger comes closest to the conventional burger with the 'aloo patty' being replaced with a beetroot one, thereby justifying the colour. The genesis of red burger lies in the brand's desire to launch something that can represent it. "Once the black was out, I was asked to make one in red because red stands for Barcelos. The logo is red, the chillies and the peri peri sauce is red. That will come to symbolise Barcelos," he says. The bun owes its hue to tomato powder and chili flakes. Refraining from meddling with the essential Portuguese flavour, the peri peri sauce is imported from South Africa.

Hot and fiery, the peri peri sauce is made from a type bird's eye chili of the same name, cultivated in South Africa. It is believed that the peri peri chilies travelled all the way to Portugal through the medium of the European invaders and found their way into a sauce that has now become a staple there.

"To control the quality and consistency, we import all the sauces that might be required for the cooking, marination or at the table, from South Africa," says Malhotra. Barcelos, which has a single store in the country, offers four choices in their sauces depending on the degree of spiciness preferred: Tangy Lemon, Mild Peri, Veri Peri, and for the super daring there is Supa Peri. Taking the Portuguese fervour a notch higher, the restaurant has also introduced a a sangria bar comprising of 21 different flavours of the wine-based Spanish drink.

Listen to the latest songs, only on JioSaavn.com
(Burgers Have Never Looked This Wacky!)

"Sangria pretty much comes from the region surrounding Portugal and Spain. So we thought, if the food is Portuguese, why not the drinks." "To get the 21 different flavours we got recipes from Portugal, Spain, Jamaica, New Zealand and all places that might have wine in their cultures. For now we have settled on 21 drinks, but we do have plans of introducing more flavours," says Malhotra.