Zero director Anand L Rai's love for samosa is a stuff of legends on the movie sets and Shah Rukh Khan is trying to hunt for it! 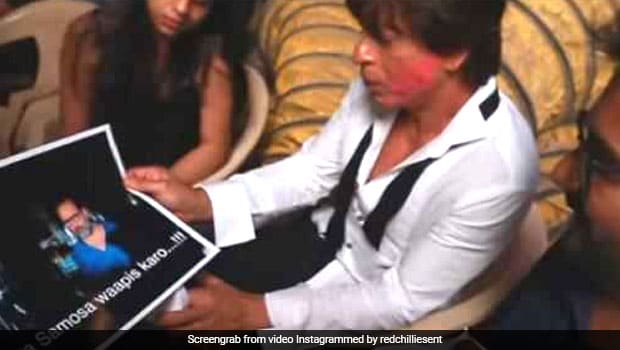 Bollywood superstar Shah Rukh Khan's most awaited upcoming film 'Zero' is all set to release on December 21st. Khan will be seen with Anushka Sharma and Katrina Kaif in the film, which traces the story of a quirky character "Bauua Singh", played by Shah Rukh himself. The trailer of the film was launched on Shah Rukh's birthday on November 2 in Mumbai; and after Zero trailer launch, SRK and the film's director Anand L Rai were seen indulging in some lip-smacking street foods like pani puri, pav bhaji, etc. Shah Rukh is known to be a foodie and it seems like the actor has found his match in the director Anand L Rai. A recent video posted on Instagram by the official handle of Red Chillies Entertainment gives us a peak into the kind of fun that the cast and crew of 'Zero' had on the sets of the film.

"@aanandlrai is looking for a lost samosa and even @iamsrk doesn't know where to find it," said the caption of the video posted on Instagram. The video shows Rai being filmed while indulging in a number of fast foods and snacks, including samosas on multiple occasions. Apparently the director loves the Indian deep-fried snack samosa (honestly, who doesn't?), but this love affair has prompted the crew of 'Zero' to make fun of him. Shah Rukh Khan even went to the extent of taking out posters of Anand L Rai with the caption, "Pehle meraa samosa waapis karo." The posters were put up around the sets of 'Zero' to remind everybody of the director's undying love for Samosa.

Here's a sneak peek at the behind-the-scenes of the shooting of Zero:

The video even shows Shah Rukh teasing Anand L Rai about his foodie antics. At one point, the director even says to the camera people, "You guys have jinxed my appetite." Well the actors and crew members sure seem to be having a lot of fun on the sets of 'Zero' and we just can't wait to watch the film in December! The film, which promises to be a blockbuster, traces the story of a man with dwarfism- Bauua Singh - who is looking for a life partner.