Why Bebinca is Known as the Queen of Goan Desserts 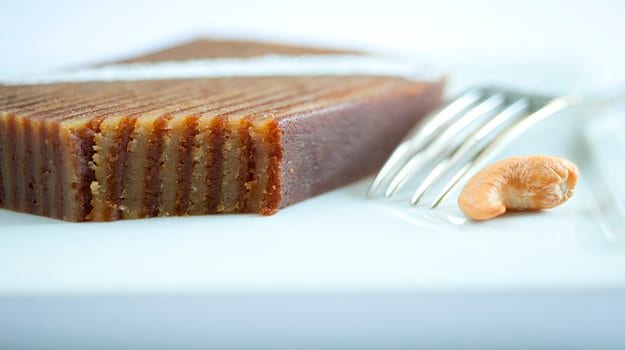 I still remember the first time I sampled Bebinca more than ten years ago at a South Goa luxury hotel buffet. In terms of taste and texture, it was nothing like any dessert I’d ever eaten in India. In no time I was quizzing the hotel’s Goan speciality chef on the cooking process and all the trivia he could share. I was impressed and requested the hotel to pack a portion for me. The packet did arrive at Check-out, except that it came straight from a supermarket shelf and not from the hotel’s kitchen. The chef bid goodbye with a sheepish expression and told me that there are only few hotels or restaurants in Goa that go through the trouble of crafting a Bebinca in their kitchen.

The Goans love their Bebinca, I’ve heard some chefs call it the ‘Queen of Goan desserts’ while many others are quick to point out that it’s the only distinctive Goan dessert. Desserts from Goa like the Doldol are similar to the Indian Halwa (except the Doldol uses jaggery instead of sugar) but Bebinca is truly unique to Goa.

It needs just four ingredients – eggs, maida, coconut milk, sugar with a hint of nutmeg and ghee but it’s the cooking process that involves baking one layer at a time, which can sometimes take up to four hours. That explains why hotels and many traditional Goan homes prefer to ‘outsource’ this dessert. There are quite a few stories that surround this dessert and culinary experts in Goa often debate about the number of layers that make up a Bebinca. I’ve heard numbers ranging from 7 to 16!

Fatima da Silva Gracia who authored Cozinha de Goa suggests that Bebinca might have been invented by Bibiona, a nun at the Convento da Santa Monica in Old Goa. Her first version was crafted with seven layers to represent the seven hills of Lisbon and Old Goa. She offered it to a priest who was not impressed and found it too small. The layers were then increased. Bebinca is believed to have travelled the world. There are references to the dessert in Mozambique, one of the Portuguese colonies in East Africa. In 2006, when it was Macau’s turn to name an Asian storm (weather system), they christened it Bebinca suggesting that the Portuguese had taken it far east. A few months ago, I walked through the streets of Macau’s old town in search of Bebinca but returned empty handed.

Recently, I met Sunita Lopez, a trained Goan Chef, at the Park Hyatt Goa and our the conversation drifted towards Bebinca. I had heard stories about how her family continues to craft Bebinca in the old fashioned way and when she invited me to her family home at Betalbatim in South Goa, I agreed happily.

Almost everyone in Betalbatim knows Sunita’s parents – Damaso and Teresa Cota. They’ve been famous for their Bebinca since 1962 (The Portuguese left Goa in 1961). It didn’t start as a commercial venture. ‘Goa in the 1960s was even more laid back than 2016,’ quips Damaso Cota. ‘Neighbours would land up at our house with sugar, flour and eggs and we used to make Bebinca for them. No money was exchanged’. Over the years the couple opted to go somewhat commercial and started accepting orders from within the village and establishments in the vicinity. Even today, Bebinca is made only against orders and the whole family gets involved. Orders spike during Christmas – Bebinca is like the Goan equivalent of plum pudding at the Christmas lunch table, and it’s not unusual for Goans to carry large quantities abroad for family weddings.

All the action is in the backyard (and not in the kitchen). This is one of the few homes that still makes Bebinca in earthen pots. There’s no fire under the pots, heat is generated by slow burning coconut husks that are placed on the lids of each of the pots. It’s a trick Sunita uses when she makes Bebinca in her (OTG) oven at home where she only turns on the heat source on top and not under the Bebinca dish. The family sometimes spends an entire afternoon (4-5 hours) in the backyard cooking one layer after the other. Damaso might be in his eighties but he still thinks it’s worth the effort. I needed just one spoonful of this Bebinca to come to terms with the real deal. This is exactly how Bebinca was meant to be crafted with a hint of the smoky flavour from the wood fire. I’m not sure if I will ever eat a more delicious Bebinca ever.

It’s clearly not easy to make and don’t even attempt it unless you can commit four hours in the kitchen (no kidding!). This is Sunita Lopez’s recipe that she typically bakes in an OTG oven. While it’s common to serve Bebinca hot with a dollop of ice-cream, you don’t need any accompaniments if you get the recipe right.

1. Extract the first, second and third milk from the coconut. This is the key process. You can choose the easy route of using packaged coconut milk but clearly it’s a poor substitute. Keep the third extract in a separate container.

2. Whisk the maida gradually into the milk and add the salt as you do. Keep it aside.

3. Grate the nutmeg (use nutmeg powder only if you can’t get hold of a nutmeg).

4. Mix the egg yolks with your hand. Add the sugar and the nutmeg to this mix.

5. Bring this together with the maida and coconut milk mix ensuring there are no lumps of maida in the mix.

6. You should have a texture that is slightly thicker than mango juice. Add the remaining coconut milk in case the mixture is too thick.

7. Heat a teaspoon of ghee in a flat vessel on low flame. Pour two ladles of the batter. Transfer this – the first/base layer to an oven (Try and only keep the top heat source on)

8. Keep adding one layer over the other adding a little ghee between each layer. You will need 7-8 layers (each layer takes about 20 minutes to bake) before you arrive at the perfect Bebinca.