Spirulina: An Algae Which is a Superfood (No, Really!) 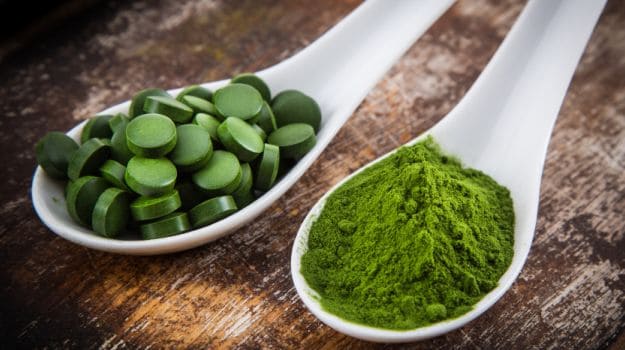 Highlights
It looks a little bit like pond scum, but – as they say, never judge a book by its cover – if you stick with that theory you’ll quickly learn that the blue-green algae, known as spirulina, is truly the earth’s biological gift to vitamin supplement takers everywhere.

Did you know that it grows naturally in alkaline water in warm regions around the world. India though, has its own dedicated centre for clean-grown spirulina in Auroville, Pondicherry, where the climate is perfect for the algae to develop, filled with just the right amount of nutrients.

What Is It Really?

Spirulina, aptly named for the natural spiral coils in which it forms, is scientifically named Arthrospira Platensis. It is known as a species of cyanobacteria – a form of microorganism that is different from bacteria only because of its ability to absorb and use sunlight advantageously, a biological method known as photosynthesis.

Considered to be among the representatives of early life on earth, cyanobacteria such as spirulina have played a part in the nutritional consumption of ancient civilisations. It is said that the Aztecs in 16th century Mexico made cakes of spirulina, drying them by the banks of Lake Texcoco, selling them as a common food source.Spirulina was used to treat those suffering from radiation sickness after the 1986 Chernobyl disaster. Doctors found that radioactivity levels in children were reduced by 50 percent in 20 days of dosing them with five grams of spirulina a day.

Why Is It A Superfood?

Packed with all sorts of nutrients from protein to antioxidants, spirulina has it all. Here’s why it is deemed a superfood:
According to Ishi Khosla, a Delhi based clinical nutritionist and founder of Whole Foods India, "Considering outstanding nutritional profile and health benefits of spirulina, I recommend this as a supplement to some of my clients. Spirulina's concentrated nutrition makes it an ideal food supplement for people of all ages and lifestyles, fussy eaters and specially those who do not manage to eat adequate amount of vegetables."

Who Should Not Take Spirulina?

"Being high on nutrition and easy on digestion, it certainly is a good addition to our daily diets, however, pregnant and lactating women and people suffering from any illness, allergies to seafood or seaweed or hyperparathyroidism must consult their physician, before including Spirulina as a supplement," she noted.

"Tropical weathers, strong sunshine, pure water resource and pollution free environment is all what
Spirulina needs for its cultivation. However, if the water is polluted or contaminated with heavy
metals, it is not suitable for Spirulina cultivation as these metals and toxins will get highly concentrated in the Spirulina and make it unsuitable for human consumption. Hence, the source and purity of spirulina is critical."

All these make spirulina a boon for those looking to keep allergic reactions to a minimum, improve their eyesight and reduce the effects of age-related eye disease, and keep nasty infections at bay. Some medical studies suggest it is also helpful in repair of liver damage.

It can help keep energy levels at a high, so is a super supplement for those with active lifestyles.

How To Take It

Spirulina comes in both powder and capsule form. Juice lovers around the world have been known to toss a few grams of the powder into their daily fresh juices and smoothies. It is a little bitter to taste, so mixing it with something that will mask the taste is advisable.

As with any supplement, it is just that – something you have to take regularly to see the long-term benefits. Don’t expect it to work if you take it just once a week, on and off. Spirulina isn’t harmful for long-term ingestion.

As always, it’s important to make sure you buy your spirulina from a trusted brand or source, as the algae can be easily contaminated with toxins if grown in a polluted environment.

Additionally, as spirulina is a stimulant of the immune system, anyone with an autoimmune disease – for example: multiple scelerosis, rheumatoid arthritis, or lupus, should avoid taking this superfood. This also goes for sufferers of the rare metabolic condition Phenylketonuria (PKU).

According to Dr. Rupali Datta, Chief Nutritionist, SmartCooky, “Like all supplements, spirulina too should not be taken as a replacement to meals, but as an added nutritional booster. When spirulina was first introduced in the market, it failed to garner popularity perhaps because of the way it looked. It is a high source of protein and good for those undergoing high stress related to diseases such as cancer and low immunity. However, further studies are still being done to put forth definite health benefits of consuming spirulina.”