The Top Trendy Desserts of 2013 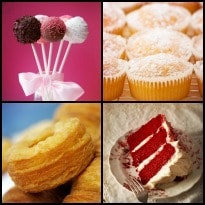 Each one of you who's a sugar devotee will agree with me - 2013 was a sweet, sweet blessing! Desserts hogged the spotlight as the most fashionable trend.

From happy little hybrids to haute makeovers, we've scooped out the best loved sweet sensations of the year. On the platter are six desserts that should crown your bucket list -

A dessert that just stops you, pokes in and says - "You can have the best of both worlds."  This was the first of the many mashups that followed. While croissants have been an all-time favorite, the donut craze spread like wild fire and took patisseries by storm until this year when Chef Dominique Ansel played the 'mad scientist' and invented a cross between the two for his bakery in New York City. With the godly fame, endless pre-dawn queues, black marketing, and replicas under different names, the cronut has had quite a glamorous year. It took the chef 2 months and 10 recipes to create this bewitching pastry that is shaped like a doughnut with the crunch of the croissant.

The cronuts being deep fried
Duffin  - A notorious favorite

How this dessert shot to fame is a story you just can't ignore! This paparazzi's favorite actually rose out of a controversy. The duffin which is a cross between a doughnut and a muffin is a popular tea treat and the main attraction of the legal row between Starbucks and Bea's of Bloomsbury in London. This popular tearoom is known to have created the duffin about two years ago. Raspberry jam wrapped in buttermilk and nutmeg batter, shaped like a muffin, baked, dipped in butter and sugared. The sweet delight attracted a lot of fans but left the chef with a bitter taste recently when Starbucks launched their own version of a duffin with similar flavors. Now as if that wasn't enough to flag a cake off between the two, the cherry on the top was when Starbuck's Factory Supplier, Rich Products Ltd trademarked the name duffin (which Bea's claims to have invented). This sparked a row between the owner of Bea's of Bloomsbury and the coffee giant.  As the 'duffin drama' snowballed, so did its sales!

A duffin has a cakey texture, glazed and sugared like a doughnut

I have to confess that I was motivated enough to join the bandwagon and bake my very own version of the red velvet. This ravishing red beauty has created patrons and got cash registers ringing around the world. From cupcakes & cakes to muffins & cookies, red velvet was the most sensational flavor of the year. Native to the States, the chemistry between the seductive color, fine crumb, velvety texture and creamy frosting makes the red velvet a complete crowd pleaser! Buttermilk, flour, red colouring, vanilla essence and cocoa powder are the main ingredients used. In olden days beetroots were used to impart the bold hue. Dig deep into the layers of a blush red sponge with cream cheese and find yourself slipping into a sweet little food coma (it's hard to bestow a superlative for this one!)

Indian textures marry a western style. The melt-in-mouth sandesh gets a chic makeover that is m(b)aking us mad! Warm undertones of jaggery studded with nuts and gond (gum), baked perfect like a pudding. These flavours of joy remained impressed on my taste buds for a long time. Be it weddings, Diwali parties or intimate get togethers, the dessert that also complements the weather is the latest sweet course fad. A new variant doing the rounds recently is the Gur Sandesh Ice Cream. With Gulab Jamun Cheesecake also topping the charts, it was a year of 'east-meets-west' desserts back home.


Salted Caramel - Going back in time

Beware; this one can get you criminally addictive! Nigella Lawson calls it the 'drug of the confectionary world'. There is something about it that you just can't get enough of! Salted caramel is an old yet passionate obsession that made a comeback this year. Ask its ardent lovers and pat comes the reply, 'Just about anything topped with salted caramel can never fail to impress!'. How was it created? In m opinion, someone-somewhere got offended with caramel just being a childhood favorite and decided to bring it back in action (just kid-ding!). Whatever it was, it did the trick - A pinch of salt was a welcome addition to the sentimental saccharine taste.

Make this much-loved charmer at home.

The internet denizens would know how cake pops reigned over all. These small bites are the big news. Cake rounds shaped like a lollipop drenched in anything that you fancy.  Here's what I do when my baking experiments fail - use up the leftovers to make cake pops! With ample room to throw in your creativity, cake pops are the easiest way to please the sweet tooth. These dainty little treats make for the perfect homemade gifts.

Cake pops - Versatile little treats
Drum rolls, trumpets, the works...as we round up the most resounding symphonies of dessertopia! I'm all agog for the sweet surprises the New Year holds. How about you?