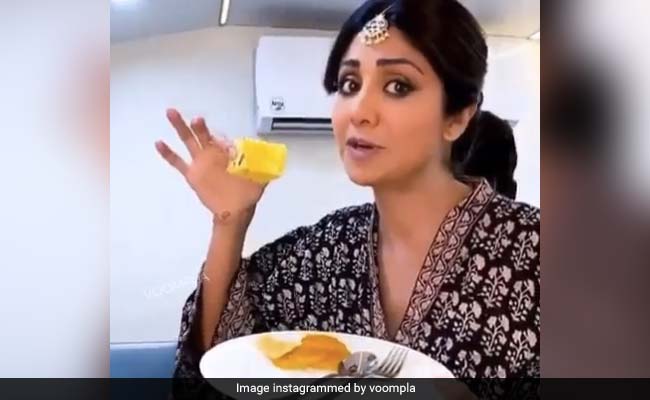 Ganesh Chaturthi is a festival celebrated with much aplomb across the country. Although the pandemic may have brought a halt to large congregations, which come as a part of the Ganesh Utsav, but that doesn't have to dampen the festive spirits. Modaks are a traditional sweet prepared on this day, with different dry fruits as ingredients and a number of regional variations too. These sweetmeats are integral to the festive celebrations; however, the copious amounts of refined sugar in them may do more harm to health than good. Shilpa Shetty decided to make a healthier dessert for the festival instead - besan coconut barfi. Take a look at her recipe:

Shilpa Shetty greeted her followers just before the auspicious occasion, "It's that time of the year and we're all geared up to welcome Bappa into our homes this week. So, our recipe had to be something unique, sweet, and healthy. The Besan Coconut Barfi fits the bill perfectly!"

She further described the healthy and delicious recipe and how it can also be made completely vegan by substituting ghee for vegetable oil. "It has no refined sugar and tastes just as good. You can also shape them into modaks, and if you want to make them vegan you can use peanut/coconut oil. They taste equally good, made a separate batch for @rajkundra9 who is vegan; he loved them," Shilpa Shetty wrote in the caption of the post.

Besan barfi is made with zero sugar and only jaggery.

The recipe involved roasting besan and desiccated coconut separately, and then bringing the two together along with some ghee, jaggery syrup and dry fruits. There was no refined sugar used in the recipe. Spices such as cinnamon powder were also used to give some additional flavour to the barfi. Shilpa Shetty gave the besan coconut barfi her own healthy twist by using flaxseed powder and garnishing the barfi with melon seeds.

So, if you're searching for a nutritious dessert recipe which is healthy and diabetic-friendly too - take notes from Shilpa Shetty's fantastic besan barfirecipe!