Celebrities too are riding high on the Pani Puri trend on TikTok, including fitness diva Shilpa Shetty and celebrity chef Kunal Kapur. 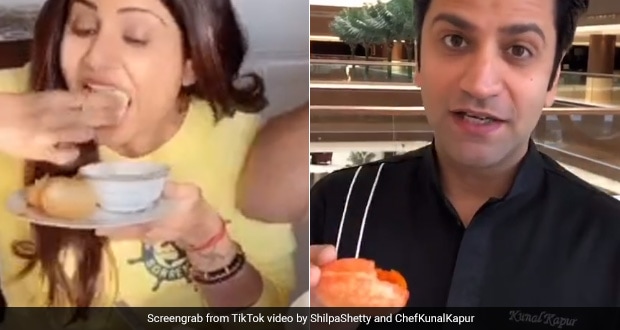 Celebrities joining video-sharing app TikTok is not a surprise anymore. From Kartik Aaryan to Jacqueline Fernandez and now even Deepika Padukone have hopped on to the short-format video bandwagon. With an instantly attractive format, and eye-catching visuals, TikTok is known to have videos that go viral overnight. Pani Puri is one such hashtag which is viral on the video sharing platform. TikTok users regularly share videos of themselves savouring the delicious street snack, with the total views on the hashtag Panipuri easily crossing 500 million.

It's not just general public who has been captivated by the Pani Puri hashtag on TikTok. Celebrities too are riding high on the trend, including fitness diva Shilpa Shetty. The actress took to TikTok to share a video of herself trying the Pani Puri challenge with her husband Raj Kundra. The challenge was basically to see who can gobble down more Pani Puri. The duo wolfed down several gol gappas, and Raj Kundra could not continue to eat more of the snack. Shilpa Shetty then self-declared herself the winner of the Pani Puri eating competition. Check out the video here:

There was a second part to the video too, wherein Shilpa Shetty was singing along to the song 'Main Toh Raste Se Jaa Raha Tha'. She was teasing her husband Raj Kundra, who could not handle the spicy tinge in Pani Puri and was sweating and fighting tears. She also showed a Mirchi Pakoda to the camera, at the point where the lyrics said, 'Tujhko Mirchi Lagi Toh Main Kya Karu'. Take a look:

Chef Kunal Kapur was also seen sharing a video of himself eating Pani Puri, but with a twist. The celebrated expert revealed the regional names of Pani Puri, which is known as Gol Gappe in Punjab and Puchka in West Bengal. He then proceeded to devour a pani puri all by himself. Watch his video:

The countrywide love for Pani Puri truly is the reason why this hashtag is viral on TikTok, with celebrities too joining the trend. Here's hoping we see more such foodie videos from celebrities on social media!