Viral: Pakistani man cooked a large pot of biryani in a traditional vessel and decided to placestrawberries as the topmost layer for the biryani. 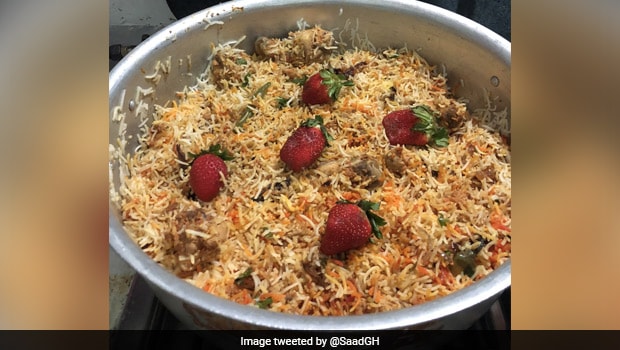 We have seen, cringed and got over so many strange food combinations in the past one year that we thought nothing can shock us anymore. Yet another weird recipe came along our way that baffled us again. Maybe, because it involved our beloved biryani. Jumping in the bizarre food trends bandwagon, a man from Pakistan gave his own unique spin to biryani; he added strawberries to it and also gave it a name - 'Strawbiryani'. He then went on to showcase his creativity through a Twitter post, and needless to say, it created quite a stir on the internet.

Pakistani man named Saad, from Islamabad, cooked a large pot of biryani in a traditional vessel and decided to place strawberries as the topmost layer for the biryani. He posted its picture on Twitter and wrote: "We made 'Strawbiryani' at home today and I am curious to know what desi Twitter has to say about it."

We made “Strawbiryani” at home today and I am curious to know what desi Twitter has to say about it. pic.twitter.com/PCZ0Ug38gc

The picture shows multi-coloured rice grains cooked along with chicken or mutton. Everything sounds fine till here but then comes the garnishing of bright red strawberries. Going by the caption of the post, the man himself invited the wrath of the internet. With 2.3k likes, 1.6k retweets and 1k comments within 24 hours of posting, the tweet is on its way to becoming viral.

Some users made fun of the dish and compared it to other viral food combinations like burger ice cream and pineapple pizza.

(Also Read: This Viral Biryani Recipe Video Made With Chicken And Dal Together Outraged Twitter)

pineapple on pizza is for mutants and criminals tho

Waiting for someone to make a ice cream out of this. https://t.co/69w2GUgOXC

Some users threatened to report the tweet for the violation of biryani code.

Yet there were some who thought it was a mere attention-seeking gimmick.

You didn't tho. You just placed 4 strawberries on biryani and took a pic for some twitter attention. If you had actually cooked strawbiryani those strawberries would be mush during Dum. So yeah.