Viral Video: Foodies on the internet were in for a surprise when they saw a video of a woman cooking noodles in a wok while dancing. Take a look! 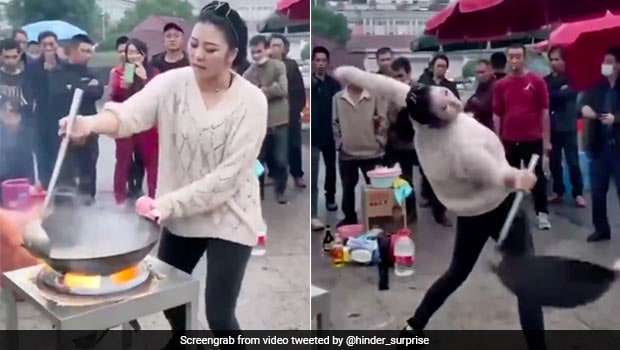 Viral Video: A woman swinging a wok around her while cooking has gone viral.

There is no dearth of entertaining content on the internet. Interesting and unique videos pop up every now and then on our social media feeds. Cooking videos are also one such category of addictive videos which make for a must-watch for all foodies surfing the internet. A recently surfaced video, however, broke the norm of regular cooking videos. Foodies on the internet were in for a surprise when they saw a video of a woman cooking noodles in a wok while dancing. Take a look:

Me making supernoodles after coming home at 4am hammered pic.twitter.com/tph250JDiI

The video was shared on Twitter by user @Hinder_Surprise. It went viral and garnered 9.1 million views and counting on the micro-blogging platform. What we saw in the video was a lady making noodles in a wok while simultaneously dancing to the international hit single 'Gangnam Style' by South Korean singer PSY. The heavy pan was amazingly well-balanced by the woman, that too keeping time with the beats of the song. The impressive antics of the lady got quite a few bystanders who were there to witness the live-action and record videos too.

The viral video garnered many reactions on the internet. Twitterati was shocked to see the woman's cooking and dancing prowess while others wished the people watching it live could have been a little more enthusiastic. Take a look at the hilarious responses:

And she didn't spill a drop, damn that's some skill

I'll have what she's having.

“Erm...Can I have mine without the pan-swinging stuff? Just a bit of soy sauce will be fine”

Promoted
Listen to the latest songs, only on JioSaavn.com
— James Lilley (@JLilley86) October 10, 2020

Some people also wondered how much practice the lady would have done prior to her performance. What did you think of the video? Let us know in the comments below!